This is the end

As I now have a website, and am able to blog there, I feel that having a separate blog is no longer needed and so I'm closing this one.

I'll still be reviewing, interviewing, having guest posts and blogging over on my website: https://petewsutton.com/ but I will no lonnger be updating this one.

So one door closes, but another opens, come and join me on my Website
Posted by Unknown at 05:41 No comments:

As ever the end of the year prompts a "best of" round up.

I've read 90 books this year (way down on previous years - but due to writing a novel and publishing a short story collection!)

So those Brilliant books?

this census-taker by China Mieville

One Flew Over the Cuckoo's Nest by Ken Kesey

A Burglar's Guide to the City by Geoff Manaugh

Since the name of this blog is inspired by BLDG:BLOG you know I'm a fan of Manaugh and this book doesn't disappoint. A history of burglary and architecture, highly recommended.

A collection of essays on what it means to be an immigrant in today's UK. This should be required reading!

Intelligent fantasy and a brilliant sequel

This is a fabulous book blending Lovecraftian horror with the experience of racism of the black characters. Reads like a series of novellas.

Like Scott McCloud's Understanding Comics this book seeks to explain and describe the unique nature of comic art. If McCloud's is a Comics 101 this is a masterclass. Highly recommend both.

The Loney by Andrew Michael Hurley

A dark modern gothic tale, does a fabulous job of evoking atmosphere and a thoroughly entertaining read.

All the Birds, Singing by Evie Wyld

A cleverly constructed book that's a compelling character study in two narratives - one moving forwards in time and one moving backwards.

I'm currently reading Don Quixote so expect that'll keep me busy til the end of the year...

Cover Reveal - The Dark Half of the Year 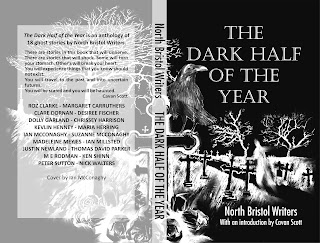 The North Bristol Writers have been working on a book this year and it's almost ready. It's called "The Dark Half of the Year" and it's a collection of ghost tales - the idea was for it to be ready by Christmas in the best M R James fashion with all stories based around winter holidays.
There's an introduction by Cavan Scott
And stories from these fantastic writers:
Kevlin Henney
Desiree Fischer
Ian Millsted
Roz Clarke
Chrissey Harrison
Dolly Garland
Ian McConaghy
Suzanne McConaghy
Myfanwy Rodman
Kenneth Peter Shinn
Madeleine Meyjes
Justin Newland
Clare Dornan
Tom Parker
Maria Herring
Nick Walters
and Peter Sutton
with a cover by Ian McConaghy
If you'd like a copy in return for a review let me know in the comments (first few comments only)
We'll be doing a launch event early 2017 with readings and book signing and other such fun
Posted by Unknown at 11:52 No comments:

Back in more optimistic times I agreed to do the Discoverability Challenge - to read 1 woman, new to me, per month and write a review. For no other reason than me being rubbish this has not happened.

So I'm going to commit to doing it again next year.

Please send me your recommendations for brilliant women writers I may not have heard of.
Posted by Unknown at 04:24 No comments:

This is quite a long rambling post reflecting on around about 3 years of "stuff"  - it grew in the telling. It also includes a few thoughts about this year's festival of literature and BristolCon - so if that's what you're after bear with me a few paragraphs...

This year started with signing a book deal - although it seems like much longer ago because I've published two books already & a few weeks ago I signed another contract.

I never expected to be able to sell novels so quickly, the reason I have done, I think is due to the Festival of Literature and BristolCon which I'll come onto reportage wise soon.

I attended a bunch of Cons, like I have been doing since returning to the Con scene at BristolCon a couple of years ago (2013 I think it was) - BristolCon and Nine Worlds renewed my faith in Cons and I discovered that I was a very different person to when I'd previously dipped my toe in the Con scene in the mid-90's.

I'd visited Octocon in Dublin mainly because of the excellent line up. I didn't know anyone in the Con world, was pretty shy and retiring (you'd not think so but I was painfully shy - so much so that I was given a nickname by a friend's daughter of 'Whisper Pete') and although I enjoyed the panels I didn't see what the fuss was and didn't return to a con until the first Nine Worlds. (I didn't take part in Bar-Con, that was the problem!)

I have been going to literature festivals for many years though - the drop in on a session and then head off format is one I found easier. (I did a post once on the differences and similarities but it seems to have been lost in the mists of the ancient internet) so when Bristol Festival of Literature started up in 2011 I very happily went along. And on a leaflet there was a "if you'd like to volunteer, drop us a mail" I thought it'd be interesting so I dropped them a mail. And now I'm one of the organisers...

So anyway, back in 2012 the festival did an event with the late Iain M Banks (much missed, he was a lovely bloke) and the BristolCon guys turned up. I remember meeting Jo Hall & Claire Carter (there may have been others, apologies if I've forgotten you were there). There was a reason I couldn't attend BristolCon in 2012. It clashed with Litfest events I'd committed to.

I attended lots of the festival's program in 2012 and got to sit in on a whole bunch of workshops and got the writing bug (or rather rediscovered an old dream that I'd never really done much about. My storytelling urge was, to that point, being fulfilled through writing for a roleplaying company). Although I didn't get round to doing anything about it until after a book launch I attended with Vala Publishing in 2013.

So I'd taken a few tentative steps in writing when there was a call for submissions for Airship Shape. I'd also backed the Kickstarter for Nine Worlds. So 2013 was Nine Worlds, Bristol Festival of Literature and BristolCon. See, go to one con and you get the bug and start going to more. Since then I've been to cons abroad too (and will do so again next year).

Jo & Roz choosing to take my story (which needed work. So much work!) for Airship Shape was a seminal moment & the T Party savaging a story I submitted to the critique session at Nine Worlds was another (that story turned into Sick City Syndrome eventually). I determined that a) I needed to read a lot of how to write books and b) I needed to practise...

And so to this year and signing two book contracts and publishing two books. I also attended Bristol Festival of Literature and BristolCon again (as well as SF Weekender, Nine Worlds and FantasyCon) - and because I'm not so shy and retiring anymore I now know a lot of the Con Crowd. I also seem to have become a fixture at Bristol HorrorCon (where I launched my novel Sick City Syndrome)

First up was Bristol Festival of Literature at which the Writing Group I joined in 2013 (the other major influential moment in my writing 'career') The North Bristol Writers did a couple of events. We did spooky tales at Arnos Vale and took part in the Flash Slam, but sadly didn't place this year (we came second last year). There was a great buzz at the festival this year, and we put on some great events.

And then there was BristolCon. Once again writers David Gullen and Gaie Sebold stayed at our house and we left bright and early with a car full of books for the con. This year the writing group decided to sell books and Pat & Rachel McNally stepped up to run the table for us & did a sterling job. This meant I was mostly dividing my time between the panels I had to be in, the dealer's room and the brick out room & bar. I was driving so bar-con didn't start for me until I'd taken the stock home at the end of the day and then got the bus back. Because we then went for a very pleasant dinner with Alistair Rennie who had travelled down from Edinburgh for the con! The real drinking didn't start till late and I feel that I missed out on chatting to so many people. Gareth L Powell has posted his con report and mentions the family atmosphere & tellingly, the Cheers theme. This is my main take away from BristolCon - it's become almost impossible to talk to everyone I know at the Con because I've come to know so many people!

Many thanks to my panelists for the Uncanny Valley of the Mind panel - it was great overhearing a few con-goers chatting in the bar about the panel and some of the things we'd discussed later. Glad to have sparked drunken conversations about SkyNet ;-)

I was also on a panel ably moderated by Ian Millsted about first contact which was also fascinating.

My last panel of the day was somehow at 3pm  - monstrous women with David Gullen, Jonathan L Howard, Anna Smith-Spark & Dolly Garland which explored some interesting territory between what's eroticised violence and what's gratuitous. I spent the rest of my time in the dealer room

It's such a great little con mainly because I know so many people there & it feels like an annual get together of many of my favourite people. Although there were a few missing this year sadly, due to illness and other commitments. But there are so many folk I've become friends with through BristolCon that I can honestly say it has been life-changing. And one person that deserves a lot of that credit is Jo Hall who stepped down from being the chair after 8 years. (I bet she's feeling very light about now with that responsibility lifted!). I very much hope it'll go from strength to strength and look forward to next year. It has very much become a highlight of my social calendar...

And so it is time to put away the con calendar for the year and reflect on where I am. I have a book to edit (It was lovely to meet my editor, Kate Coe, at BristolCon - that makes a big difference I think) and ideas for more books. I have a decision to make about what to write next and some thinking about where I want to go career-wise. (It still feels weird to talk about a writing career!) and about defragmenting my life (more on that anon). But it may go a bit quiet here for the rest of the year - except for a couple of guest posts.

Somehow this all got a lot longer than I thought it would. You sit down to write a short story and you end up with a novella. I blame sleep deprivation!