OK a lot of stuff has happened and I've not blogged due to lack of computer access, lack of time and dread lurgy. So now I'm remedying that .. read on for a looong post on what I've been up to


After 9 worlds there was a break for "Real Life" before heading back down to London for Loncon. We had bought day tickets only (more on that later) but went down Friday night so we could nerd out over Shakespeare and go to the globe to see Anthony & Cleopatra 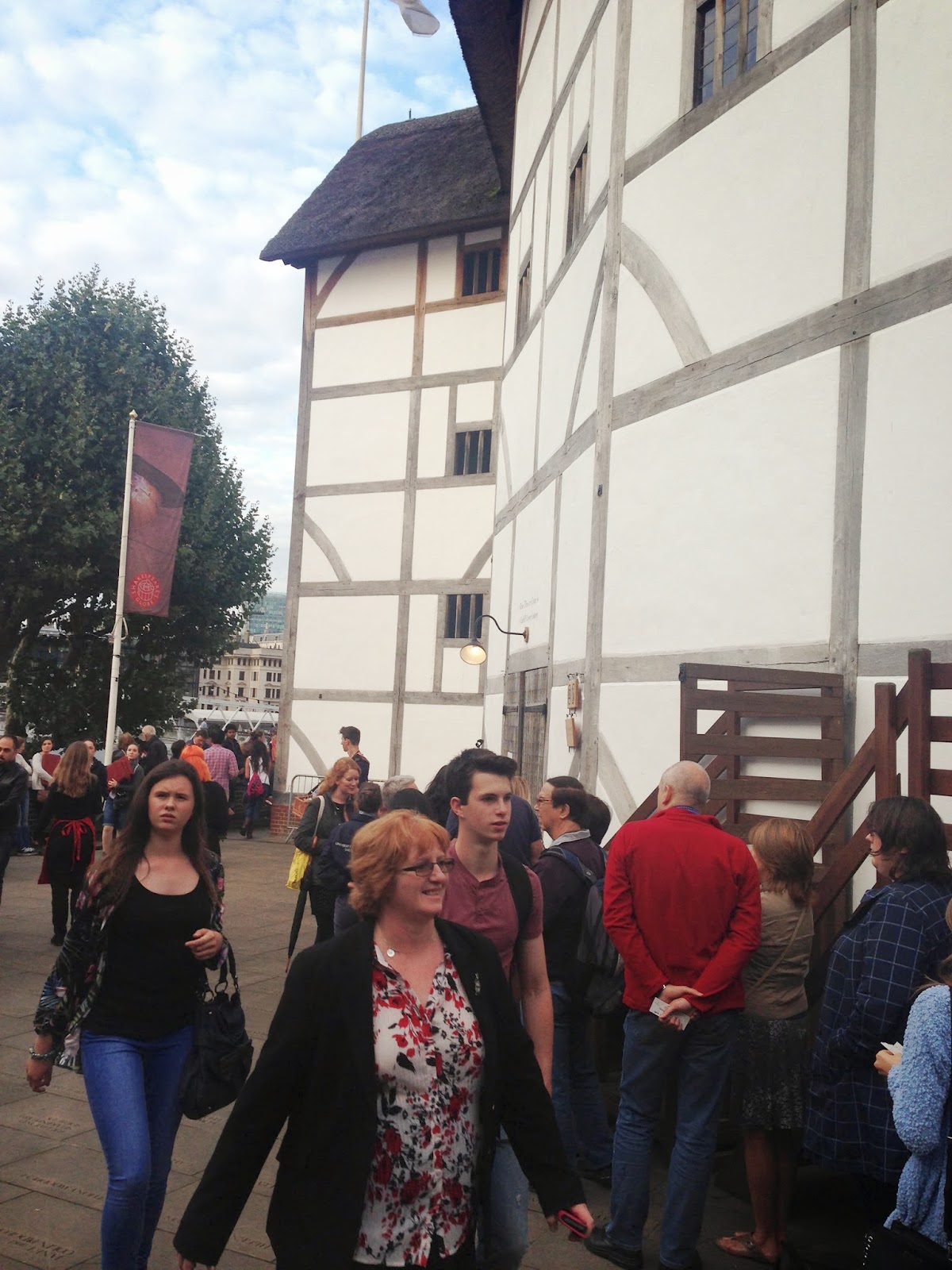 As usual high production values, great acting (even if the leading lady was a stand in with script in hand) and for once no rain. The Globe is great and if you've not been to see Shakespeare there you really should. I recommend standing - close to the stage if you can.

After a very quick visit to Borough Market and being disappointed that our favourite breakfast cafe was closed, we hightailed it across town to the Excel centre.

It swallowed 10,000 people easily. And yet I still managed to bump into a lot of people I know and even got time to chat to a few of them including a friend I've not seen for several years.

After a brusque sign in, where we witnessed the greeter shout at her helper for trying to give us the free book. Imagine, giving a freebie to those day visitor scum!

We arrived in time to see Jeff VanderMeer (Jeff's a recurring character in this post) moderate a panel that included Pat Cadigan and Robert Jackson Bennet on "Imaginative Resistance" which wandered a little off topic at times but was really interesting, although I would have liked to hear more from Sarita Robinson the psychologist on the panel. 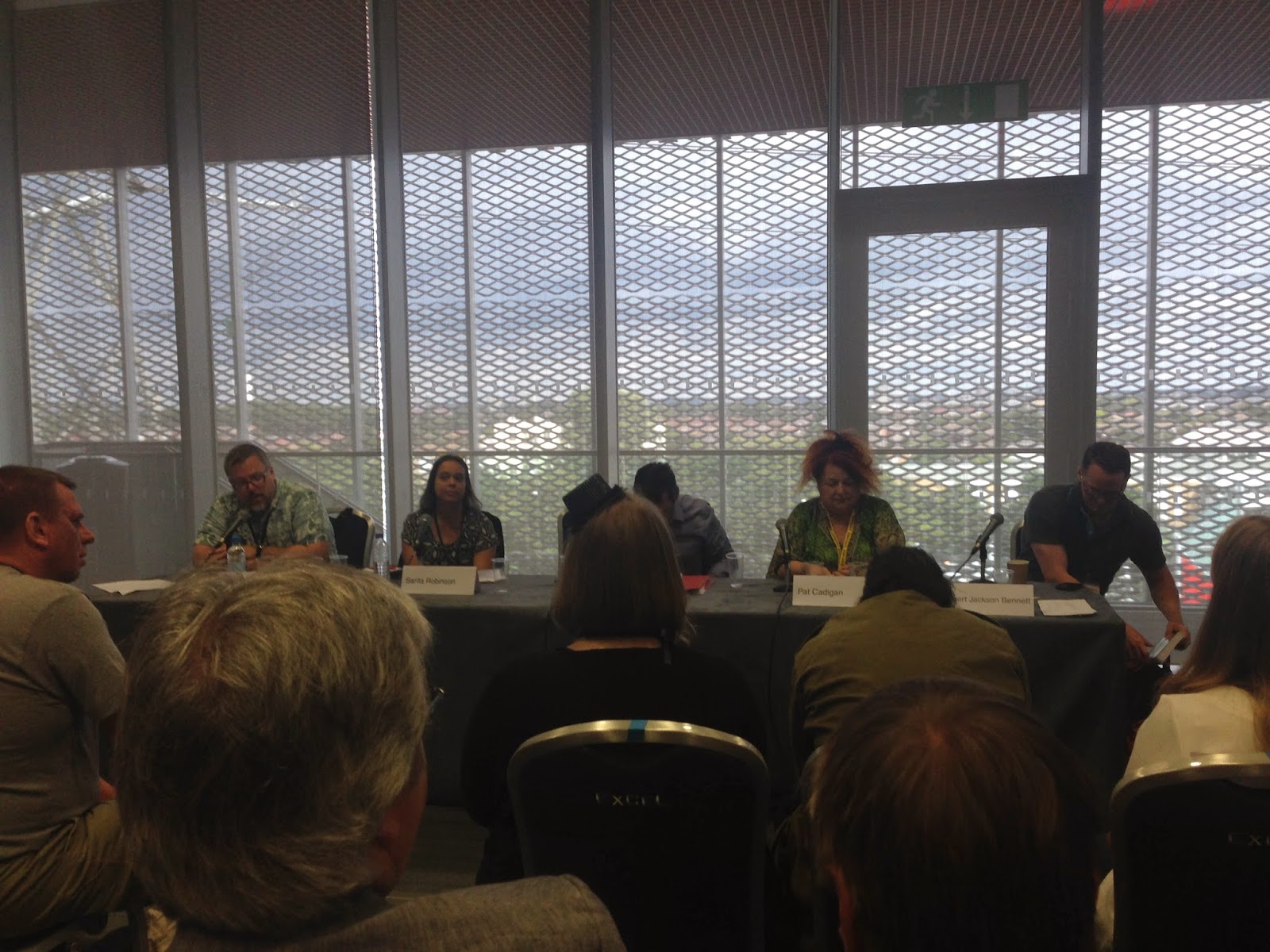 After wandering round the dealers hall and lunch is was my turn to be on a panel Old New Classics: The off-beat and indie comics of yore, after a quick visit to the Green room for a complimentary drink. Sadly Scott Edelman was ill so I ended up moderating. I was slightly bemused as to why we were in a much larger room than the earlier panel I attended.

We then decided to have a wander round the dealers hall again, the art stuff, the fan village and spent a pleasant hour or so chatting with folk from Bristol over a relatively reasonably priced pint of real ale. 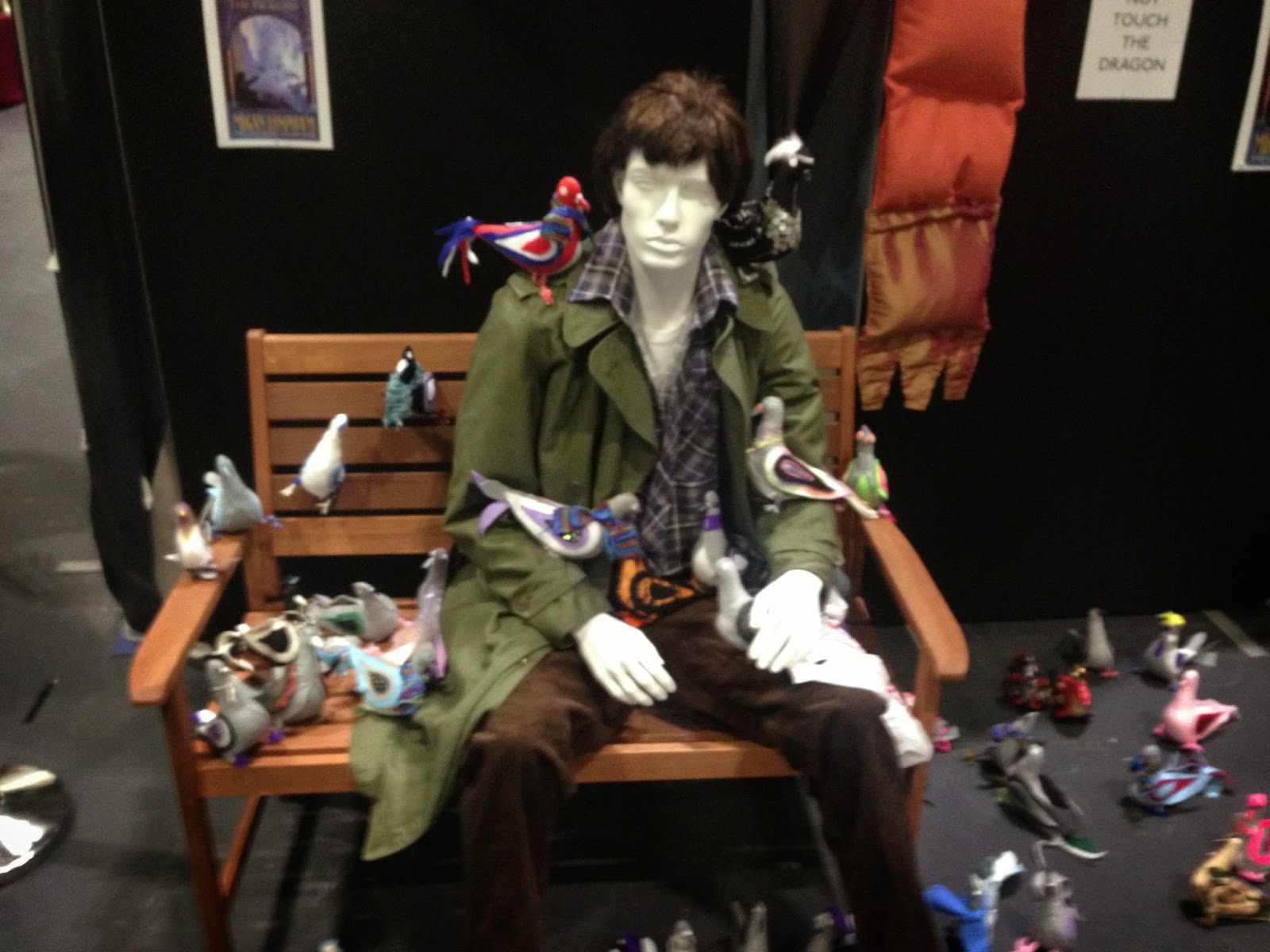 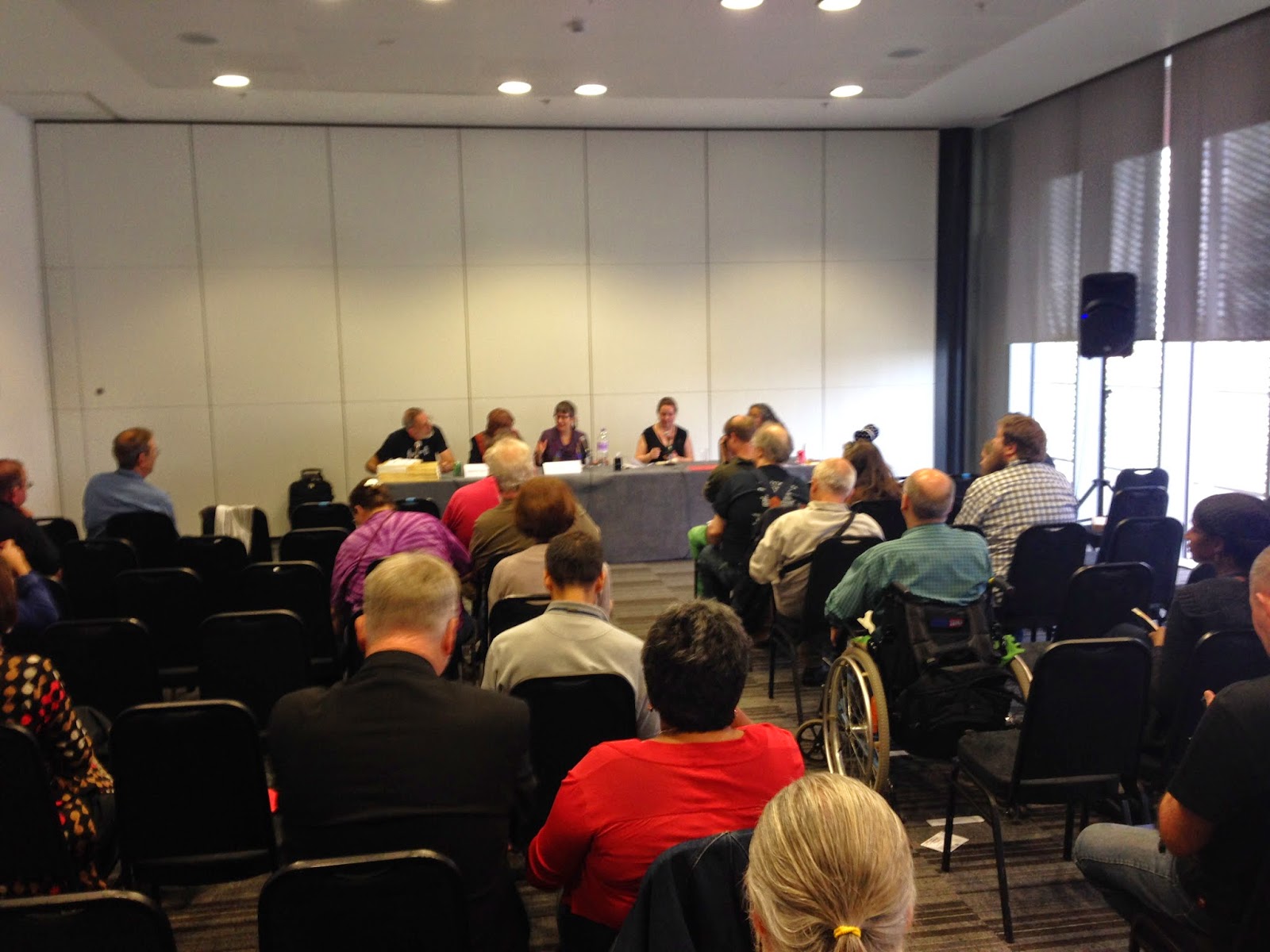 Then it was time to head to the fan village for the Pirate Program where I was set to do a reading. I chose to do Five for Silver (because it has pirates in it) from the collection Thunder and Magpies (more on that below too) but had time for only half of it - didn't get much laughs this time so think the first half set up is definitely required. I love the idea of the Pirate Program - more details here 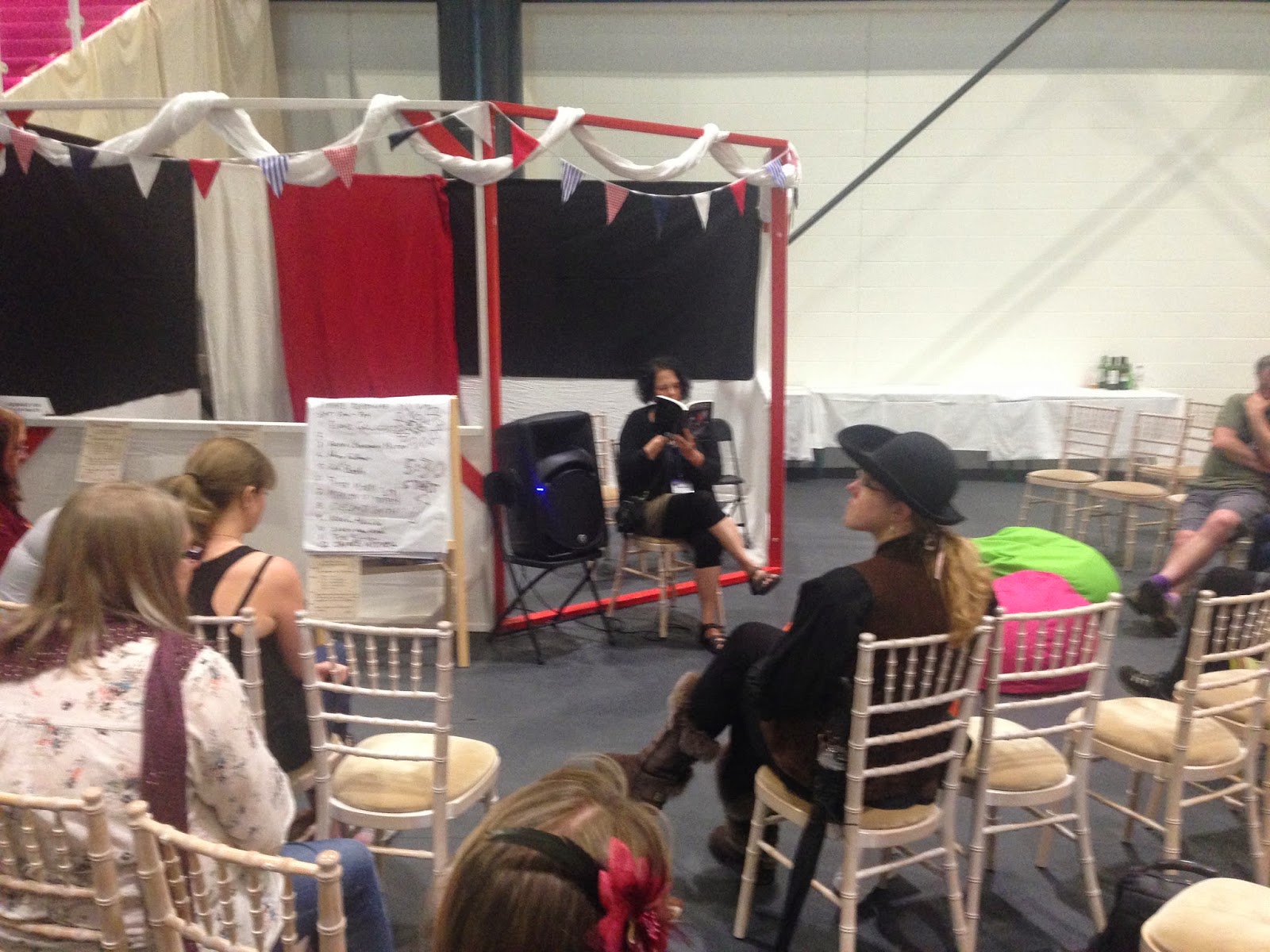 Then we had to scurry off and get a train.

Now I've read the Daily Dot article & Pat Cadigan's riposte (on Facebook) which addresses the ageist nature of the DD article. Having attended both 9 worlds and Loncon (and enjoyed both) I think the DD make a category error that Cadigan ably demolishes in that the difference is not about the age of the attendees it is more a scale and scope thing. However I disagree with Cadigan that if people don't feel welcome they should just "get over it" & I think our experience at sign in & throughout LonCon ("Oh you're only here for one day" said pretty much everyone we met as it said so loud and clear on the badge) was different to 9 Worlds. How about instead of scoffing at the fact people felt more welcome at 9 worlds you wonder why this is so and try to make Worldcon more welcoming?

The next day we flew to Edinburgh 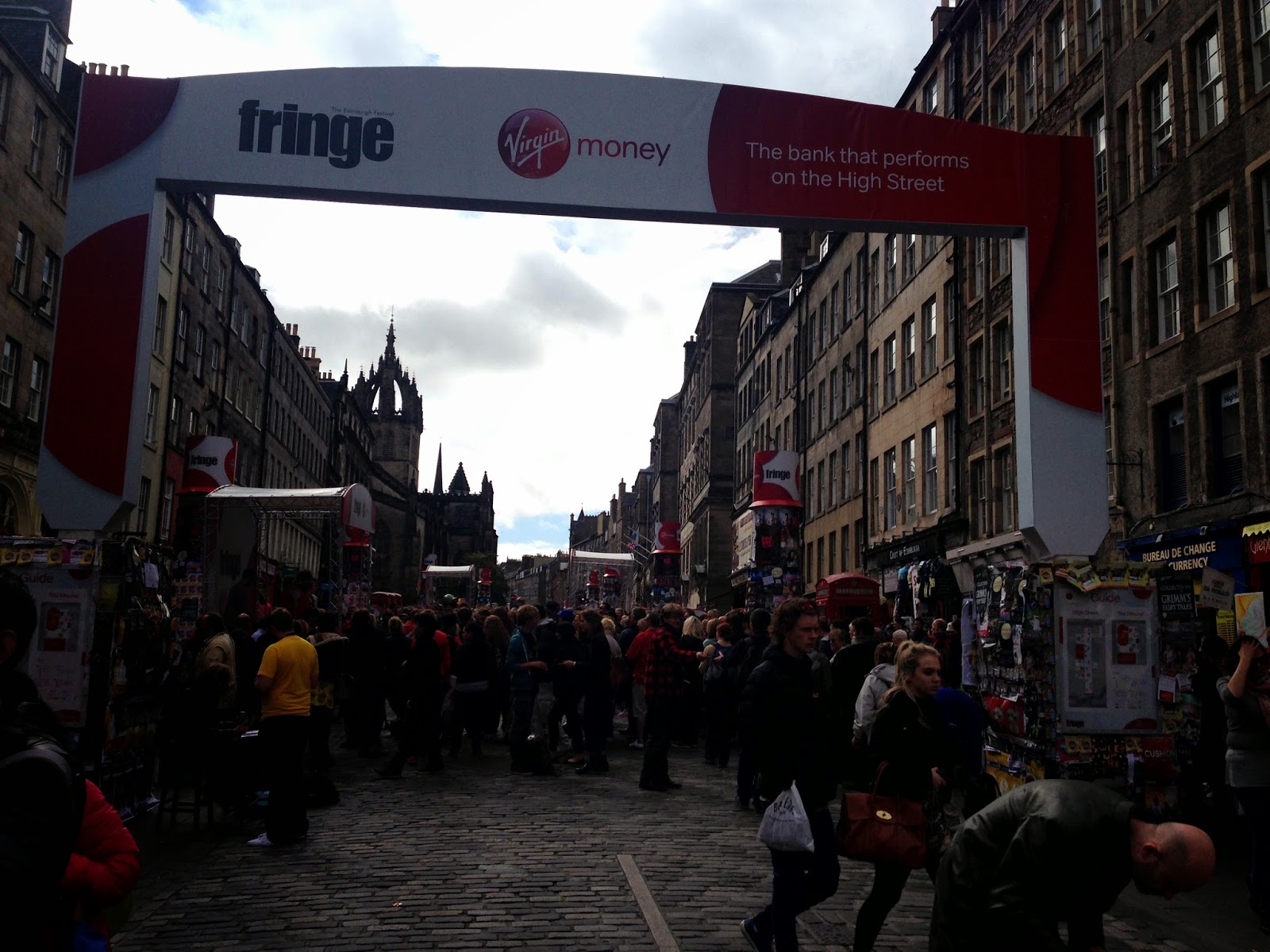 We hit the ground running and chose a random show that had some good reviews and it was pretty much the best thing we saw at the fest - Inheritance Blues. We then went to a brilliant Skeptics on the Fringe talk on knitting and mathematics 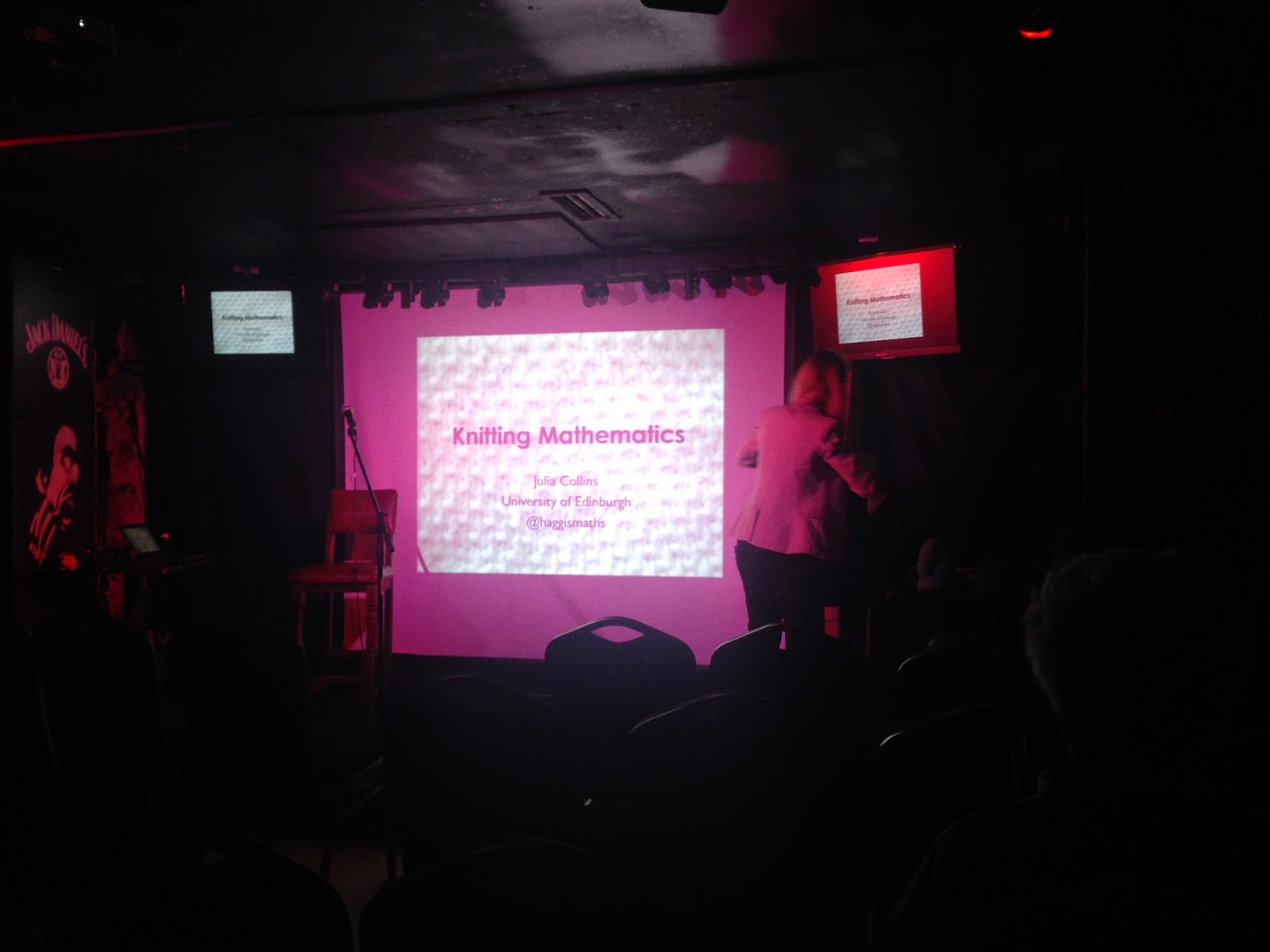 and then to see a very disappointing Richard Herring who's show seemed confused and cobbled together and pretty much the worst thing we saw at the fringe.

Over the next few days we saw Jeff VanderMeer & Nick Harkaway at the Book Fest (not at the same time) & was very restrained in the Book Festival shop, saw poetry, music, comedy and theatre, Simon Munnery, Mitch Benn, a show based on Quantum physics with Jim Al Khalili and one improvised and based on Quantum Leap, we went to a photography exhibition and a gin tasting tour. As usual Edinburgh was eclectic, hectic and very enjoyable & we'll be back next year as usual. 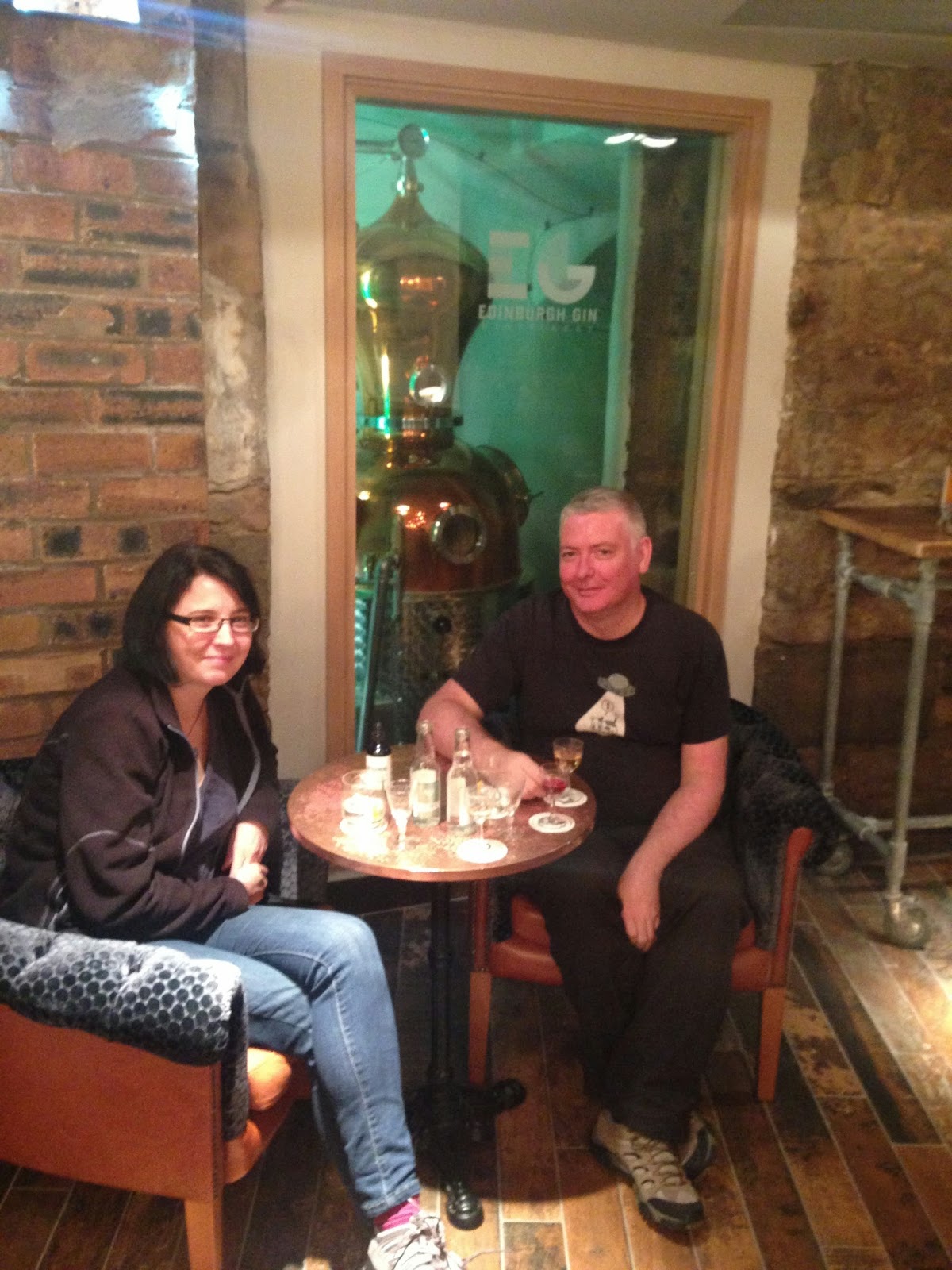 Back to Bristol in time to attend The Bristol Bad Film Club showing of Masters of the Universe outdoors in a park.

Then Monday was our Small Stories: Big Books event with the VanderMeers. Many thanks to all involved especially Nat & Sian from Small Stories, Cheryl Morgan, Aaron Anthony, Luke Slevin & Pat Hawks-Reed! 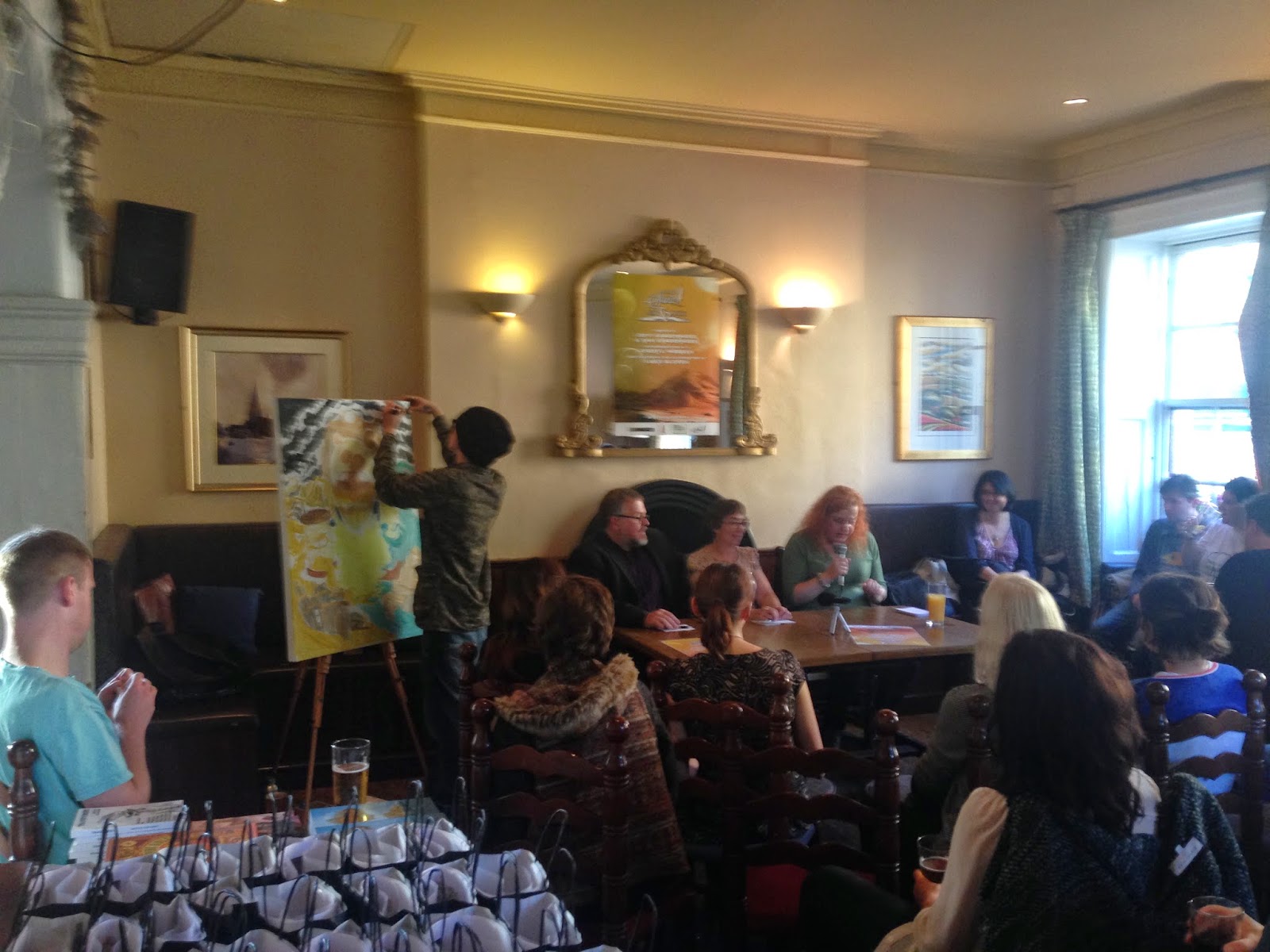 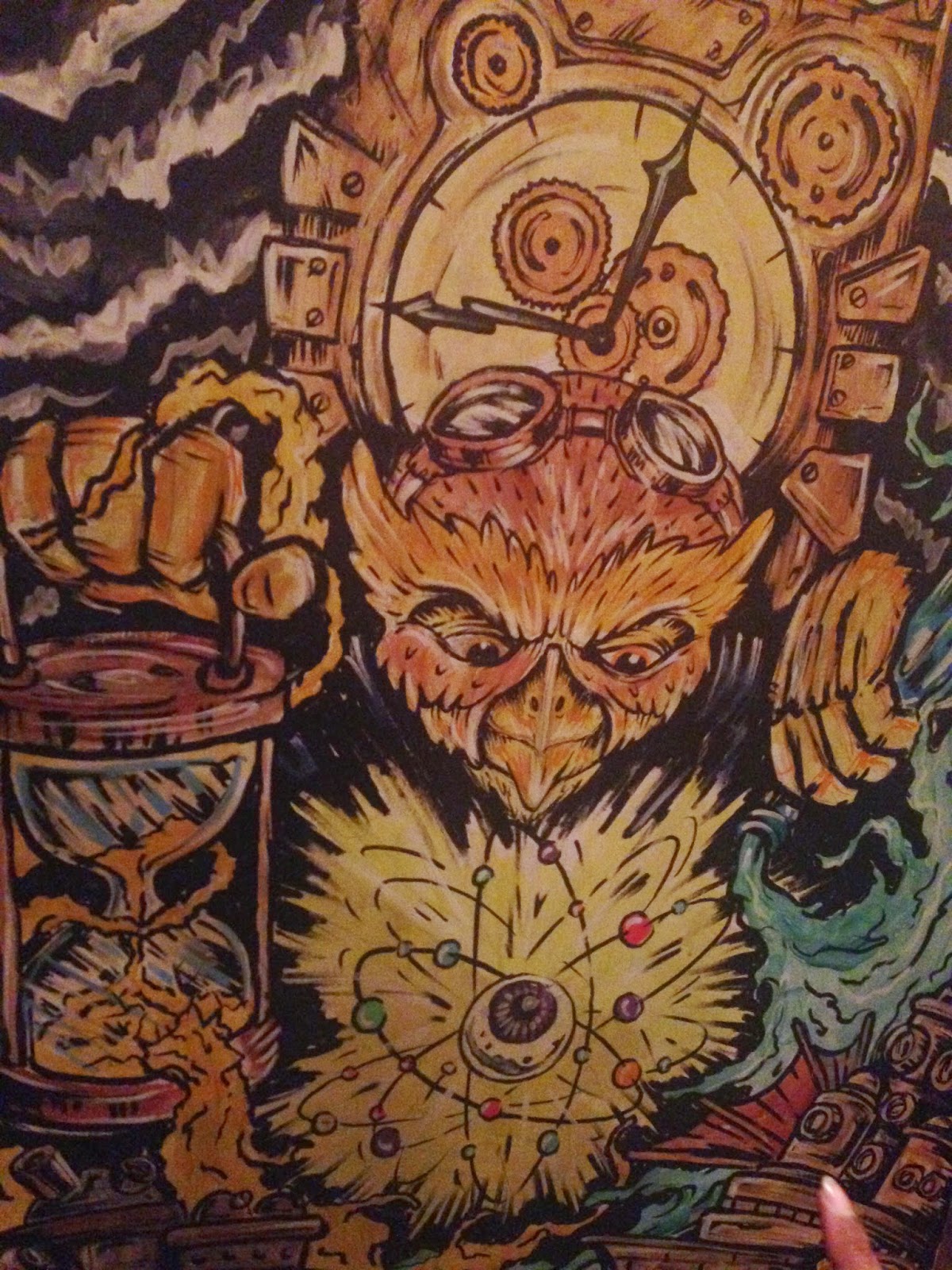 We had cake (Thanks to Pat Hawks-Reed!) 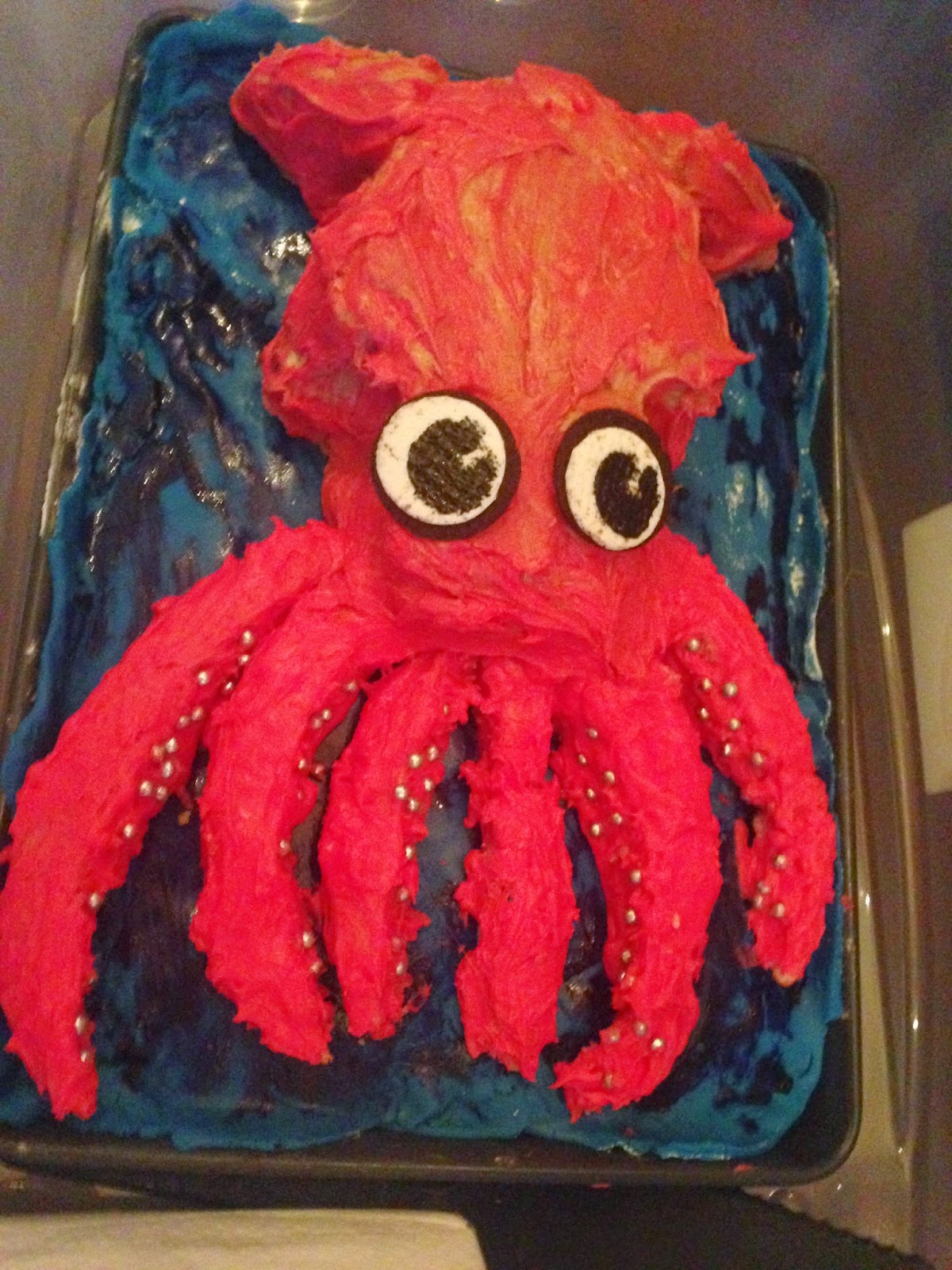 and a reading by actor Aaron Anthony 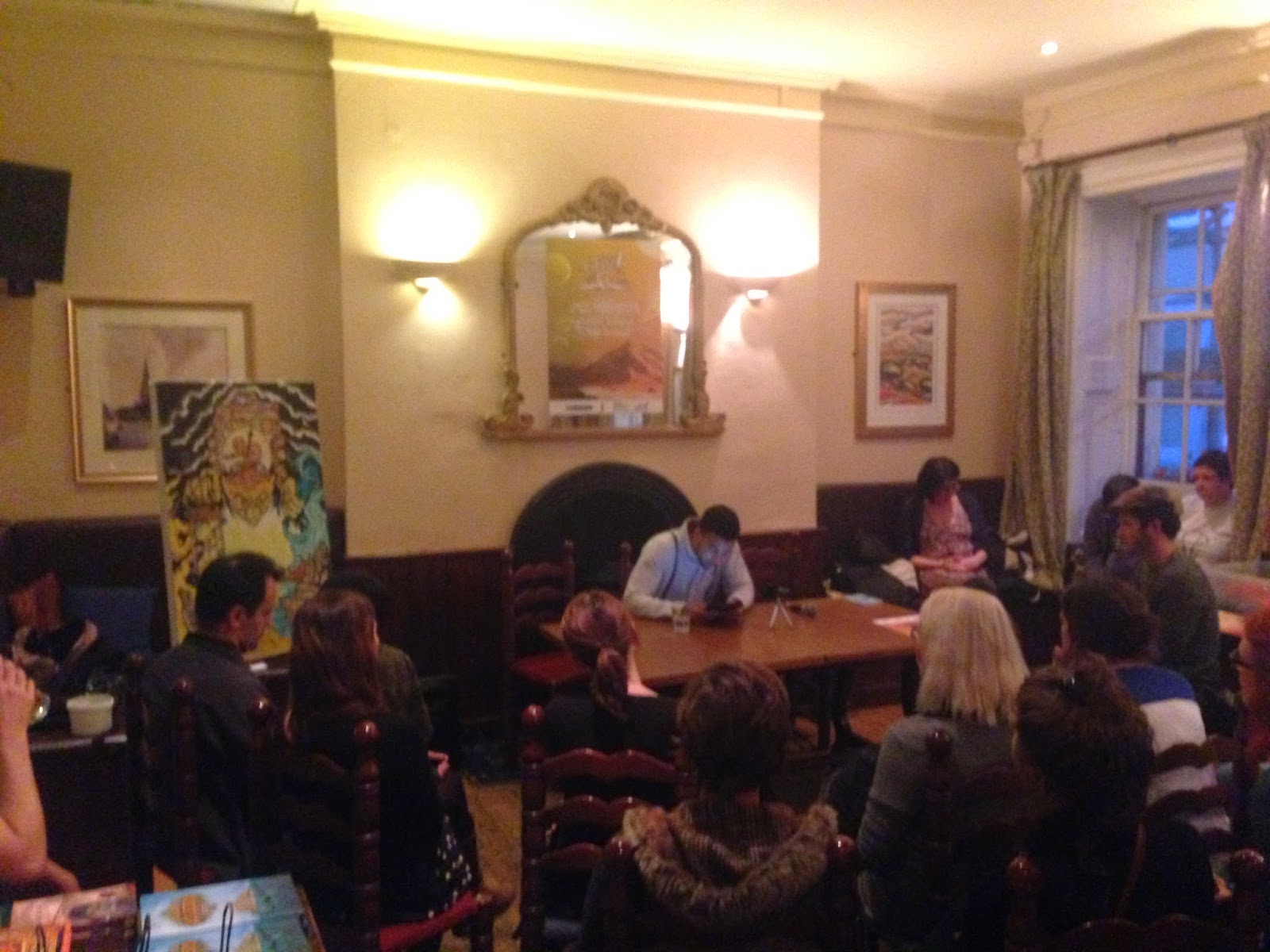 And the evening seemed to go down well with all involved, which meant a big sigh of relief from me!

The next day we showed Ann & Jeff around Bristol & Bath, including meeting a bunch of Aussie writers in a pub (obviously) before Jeff's event at Mr B's Emporium 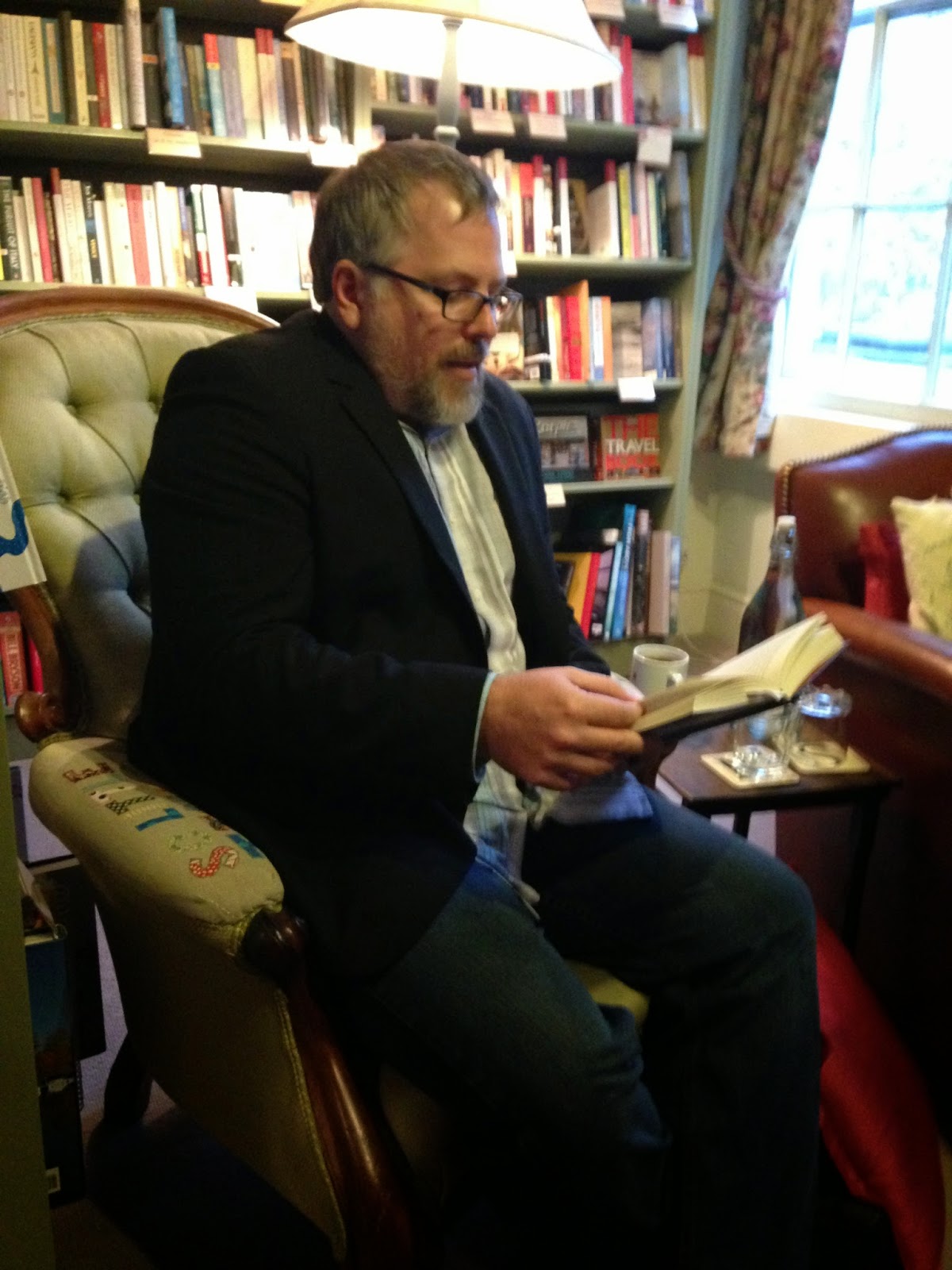 and a fantastic meal at the Firehouse which I'd highly recommend. Then my cold got the better of me for a few days and here we are looking towards future booky events.

First up is Fantasycon where I'll be doing a reading after Adrian Tchaikovsky and before Emma Newman (so no pressure there then!). Haven't decided what to read as yet. I've put together a collection of my stories in what I'm currently calling Thunder & Magpies which has had good reviews from beta readers and is now out with a publisher for consideration. I may read from that. I am also currently working on an anthology with the North Bristol Writing Group called North by Southwest and potentially could read one of my stories from that. Expect to hear more about both of those and another anthology I'm working on (more details soon) over the next few months.

It's a busy time here - I'm working on some reviews, currently reading an Akashic ARC which will lead to an exciting interview (details soon). As well as working on three (or maybe four) anthologies I'm going to start revising & editing my novel (tentatively called Seven Deadly Swords) for submission hopefully by end of the year. I'm also editing a friend's self-pub book (which is teaching me a lot) and have been approached with another MS. As well as working on editing Far Horizons which is also a great learning experience.

Right, best get on with those reviews ...