Guest post - The Horrors of Writing by JM Thorne

JM Thorne is the author of the literary horror novella, Watching, written as part of the creative piece during a masters degree in creative writing. Stories have been written in other genres, such as speculative fiction, and romance, and have been published in the US, UK and Australia. Currently enrolled in a PhD candidate in creative writing, the genre now of focus is a gritty historical family saga, where there is bound to be hints of horror. Soon there will be another story in the world of Watching.

Watching by JM Thorne
available at Smashwords and Amazon

"They come to see us bleed." Captured by aliens, Roo is bled to near death in performances for their viewing pleasure. His survival depends on how long he can last during his time on the stage. The longer he performs the greater the chance he has to succeed in turning others against the aliens. But that's not easy when you have to perform each night in a show that bleeds you close to death. 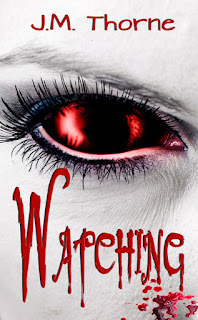 The Horrors of Writing
by JM Thorne

I was never quite prepared for how difficult the journey is to get published. A few years ago as a newbie writer the biggest warning I got from published authors was not to quit my day job – I already had. The knot of dread began to twist in my stomach, but I told myself I could do this. I just had to keep writing. I was told on numerous occasions by published authors, editors, and publishing houses that even in the changing market to digital books authors could make a living from their writing. So, filled with determination, enough to sink a battle ship, off I went to earn from my art, ignoring the knot of dread in my belly. But despite publications, and many were just for the ‘honour’ of getting your work out into the world, reality kicked in. I returned to my day job part time so I still could have some days where I could write and not starve in the meantime. I didn’t feel a failure, because I was, still am, getting work published, it just wasn’t the fairy tale I had hoped for and perhaps my expectations weren’t grounded in reality based on the contemporary market of publishing.

So what were some of the horrors for me? And do they still exist.

The main genre that seems to come out in my writing, especially at those times when my mind balances between the conscious and unconscious, and I slip into a magical space of creativity, is horror. My stories have a natural tendency to go down the path of the dark side. I don’t know why. I’ve tried to work it out since I haven’t read or watched a lot of horror, but this genre certainly marks my works beyond my control. It seems to ooze out easily like a cut on the skin, the blood my ink and the flow of story is strong. Then I discovered how difficult it was to get horror published, and how niche the market is. It’s important to know who your audience is. But I did it back to front, and wrote the story, then did my market research. It was a good lesson to learn.

While I kept getting off the slush pile with Watching with big publishing houses, full manuscript requested and there was genuine interest in the story, it ended in silence from the other end, with me assuming that the interest was short lived. I was a lost soul in the forest, scrambling to get out of the dark and trying to find a place for my story in the world. I tried writing in other genres, pulling my stories out of the shadows, or damp caves where my inspiration lingered. But it was just as hard to find a home for my stories. It was also a very slow process. It could take up to eighteen months before my story would be published. And there I found my answer.

Getting published was hard work.

Once I had a story published it was even harder not to focus on the sales and be consumed by how well the story would sell. After all, I had quit my day job. During some deep reflection I found a way forward, which was to return to the basics, back to what I loved the most – writing stories. Off I went to write the next story because that is ultimately what I enjoy the most.

I had been changed. While I had tried to make writing my sole focus in my life (well at least one of the biggest after family and friends), I came face to face with another monster. I wasn’t going to die if I didn’t write. Nor was I going to fall into the Abyss and be lost forever if I didn’t write everyday. Plus it was also important to get out with fellow writers and chew the fat, and moan and groan, and realise that you aren’t alone in this journey. And so I changed my focus. I returned to my day job, which not only brought in much needed money and eased the knot of dread in my stomach, but also gave me a more grounded perspective and stopped me thinking that the world was a room with just me, my computer, and dogs at my feet.

This leads me to the final horror. Writing is very lonely. It was great at the start just me and the characters in the worlds I was building. Considering I was finding some dark characters, like one who tore wings from living creatures to make her own, a world where aliens came to see humans bleed, and a shopping mall where you can buy skins, I couldn’t help wonder if spending days upon days alone was really a healthy thing to be doing. I realised I needed to get back out in real life. As much as I enjoyed spending time with my twisted characters with their dark hearts, I needed to see family and friends more often, do workshops, exercise, walk along the beach and get a hobby (other than reading). Because it’s all of these outer factors which subconsciously feed my stories and create characters in my mind. Plus I had already learnt that getting published is hard, being a successful author takes time, and at the end of the day if I don’t write I won’t die.

I made peace with the horrors I’d met, and while I keep writing, I do spend more time closing my lap top, pushing the characters away in mind for later. After all, I don’t want to be facing horrors when writing I want to be having fun.