This week I have been talking to David Gullen the author of Shopocalypse. My review below the interview. 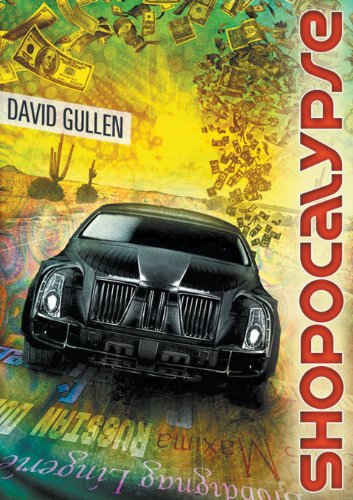 Tell me about the world of Shopocalypse


Shopocalypse is a distorted reflection of the real world, where some things like consumerism have been twisted to extremes and others such as the global climate have speculatively jumped forward a few decades. The whole planet is teetering on a knife edge between apocalypse and survival, and of course it’s up to my two heroes, Josie and Novik, to try and make the crucial difference. It’s not all bad because they meet some good people, including a few who aren’t actually human - and of course there is a very cool intelligent automobile.


What was the path to getting this book published? Was it the first you wrote?


This is my third novel, and the path to publication was difficult. I don’t have an agent, though that was not through want of trying. Shopocalypse gathered 136 rejections over two years from agents and publishers in genre fiction in the and the . Sometimes I really wondered what I was doing. In the end publication happened because of the help and belief of a small number of people: my partner, Gaie Sebold, science fiction author Jaine Fenn, and Colin Tate at Clarion Publishing. There were also a larger number of other people who helped in smaller ways, for which I am of course very grateful. Without those three people in particular I don’t think it would ever have happened.


Now, of course, it’s immensely satisfying to see it in print and being well-received.


If you could be a character from the book who would it be and why?


I’m not sure I’d want to be any of them, I give them all such a hard time. Possibly Ellen, because not many people get to become a kind of superhero, but maybe I’d go for Jericho Wilson. It won’t spoil anything to say he starts as a burned-out middle-aged ex-cop, and I think he has a satisfying arc – an ordinary man trying to cope with extraordinary times, his own past and his own limitations, finally rising above them. I do seem to identify with my middle-aged male secondary characters, they do keep cropping up. Maybe it’s because I am one. (Though I don’t think I’m a secondary character, at least not in my own life. That would be strange.)


What are you working on right now (apart from this interview of course!)


I’m just coming to the end of the first draft of a big fantasy novel currently called ‘Beyond The Streets We Know’. This is a retelling of the legend of the Wild Hunt: how the Hunt came about, who leads it, and what they are doing. It’s also about a contemporary kid called Carl White and his dog Bronz. They  get tangled up in human trafficking between this and other worlds. One thing I wanted to write about was the ‘gangsterism’ of feudal societies. It’s a gritty, grimy book, but I wouldn’t call it GrimDark as there are streaks of romance too.


‘Open Water’, my first collection of short stories, is also in preparation. This is being edited by Terry Grimwood at the Exaggerated Press and should be out soon. There’s a mix of previously published and unpublished stories so even in the unlikely event you’ve been obsessively reading my work there are some new things too.


Do you have a set writing process, if so what is it?


I like to write early rather than late, so I tend to be up and ready to work around . My bottom line is to write 1,000 words a day. It’s usually more but if it’s good enough for JG Ballard it’s good enough for me. One thing I like to do is to keep interrupting the writing with other short tasks of 10-30 minutes. These can be quite mundane – housework, some exercises, a bit of gardening. Interruptions make me far more productive compared to just sitting at the desk all day. To help with this I use  a timer set at one hour intervals. It’s a flexible routine, if things are going well I push on.


I’m a part-time writer. Three days a week I’m doing the day job, IT Tech Support, the other days I write. I’m very lucky to able to do this.


Who would you say are the major influences in your writing?


I’ve already mentioned Ballard, one of the great writers of the English language of the modern era. Jack Vance is another wonderful stylist and imaginative storyteller. You need to develop your own way, or ways, of telling stories. Shopocalypse has a specific style, its own ‘voice’. I think the real influence is the great melting pot of all the books I’ve read, fiction and non-fiction, music, film, life, experience, the world. It all goes in and somehow it makes stories when it comes out. Music has had a surprisingly strong influence, and particularly with Shopocalypse, which is a kind of road movie with a rock and electro-pop soundtrack. I’ve no idea how this all hangs together but your subconscious is your friend and you need to learn to trust it. After all, it is actually who you are.


What are you most proud of about the book?


Structurally I’m pleased with the way the chapter interludes work to build a vibe, a culture around the story. Some characters only exist in those short extracts, and one in particular starts as a major character, goes into them and comes out again. I liked that.


I also liked that I worked out a way to write a story that included themes about things that bugged me without thumping people over the head with metaphorical political pamphlets. The humour helped there I think, some gags just want to be told. No doubt some people will disagree with me on this but I thought it went OK.


This is very much an SF book, is there anything that draws you to this genre over any other?


SF and Fantasy are the genres I just naturally gravitate to. Without thinking, I just write stories in those places. Obviously, you can write about impossible things, other worlds, magic, or things that haven’t happened yet. Being able to do this is a powerful tool, a mirror you can hold up to the world so you can see it better. Taking your own culture, prejudices, preconceptions out of a story is one way to intensify what you want to write about. To my mind stories should always be about something – the themes. In Shopocalypse this is overt but it doesn’t have to be. Stories are for sharing - experiences, opinions, dreams and nightmares. I think that’s why we write.

This is a big book with big ideas and lots of plot. It will take you some dedication to finish it. It’s not that it is badly written, quite the opposite in fact, it is that the breadth of plot is staggering and takes some getting used to. There are a lot of ideas in here and a lot of characters, most of whom have their arcs fully explored. It could be seen as rambling and incoherent but if you stick with it there is a point that you’ll suddenly go “aha” and get it. Once you’ve had that moment though you’ll really want to get to the end and find out what happens to all of the many characters: from the president of the USA and her coterie of weirdos and warmongers to Novik our main protagonist and his friends who are trying to change the world, from “Mr Car” the talking super car, who gets all the best lines, to the richest man who has ever lived. There is a not so subtle allegory about consumerism but if you concentrate on this you miss out on all the other fun stuff that is much more subtle. There is an occasional Vonnegutian feel, there are certainly references to Douglas Adams but it is very much its own thing and introduces an interesting new voice to SF. There are issues with it, I’m not denying it, but not to the extent that it is not hugely enjoyable, even if it does take a bit of an effort to get there. There maybe a couple of character arcs too many, the story about the wife of the richest man seems a little indulgent and could have been cut without losing much and is also possibly the least satisfactory of the multiple storylines. However this is a minor quibble. Try it and stick with it, it’s worth it.

Overall – Very accomplished debut from an interesting new voice, looking forward to what he does next.
Posted by Unknown at 04:26