Erik Williams is a former Naval Officer and current defense contractor (but he's not allowed to talk about it).  He is also the author of the novel Demon and numerous other small press works and short stories. He currently lives in San Diego with his wife and three very young daughters. When he's not at his day job, he can usually be found changing diapers or coveting carbohydrates.  At some point in his life, he was told by a few people he had potential.  Recently, he told himself he's the bee's knees.  Erik prefers to refer to himself in the third person but feels he's talked about himself enough and will grant your eyeballs the freedom they deserve. 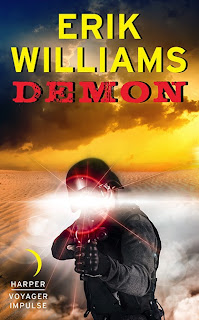 Cross genre novels?  I guess you could say all genre novels, in some form, are a cross genre novel.  I mean, there is no such thing as a pure horror novel.  Often there are elements of historical fiction (like Interview with the Vampire), or crime and mystery (like Falling Angel), or even military fiction (like my recent novel Demon).

The point is, genres overlap.  They always have.  However, there are that stand out more than other.
You can see them practically bleeding multiple genres, and with awesome results.

So, here are five cross genre novels worth your time:

Many thanks to Erik for the interesting post!
Posted by Unknown at 07:26