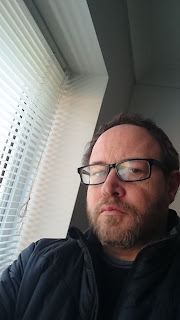 Matt Duggan is a Bristol born imagist poet, who won the prestigious erbacce prize for poetry from well over 5,000 entries worldwide. Matt has had his poems published in over sixty journals and magazines, and is involved in many other artistic projects.

When you tell people you are a poet how do you describe what you write?


I would say that I’m a contemporary imagist poet and have been influenced by imagery in writing, like the poetry of Ezra Pound and many other imagist authors.  I like to write about a mixture of themes sometimes controversial, sometimes touching on the plights and strengths of the human condition, also on subject matters that are rarely written about, like events in history, I like experimenting with form, colour, shape, and rhythm.


What is the significance of the title?

The title of my new collection Dystopia 38.10 (erbacce-press) refers to the title poem, the title poem is the 38th poem in the collection and is a sequence of ten poems, but this is no futuristic dystopia, this is very much a contemporary dystopia, the title poems takes you on a journey, a journey that builds like a crescendo. The poems are descriptive, and sometimes brutal, yet layered with a fondness for human tenderness.

Well, I’m working on several projects at the moment my next collection of poems ‘Kinematophy’ the title poem being a journey through the history of propaganda and media manipulation which is scheduled for publication (Erbacce Press) late 2017/18. A pamphlet which I’ve just finished editing titled ‘The Ghosts of Devon’, plus, a long sequence poem which I’ve been working on for the last two years titled ‘El Tajo’ this poem was inspired by a trip I took to Ronda in Spain a few years ago. Many poets and authors have also been inspired such as Hemingway and Rilke, the poem highlights several aspects of history that the town would like to forget like when Franco and his troops threw people from the cliffs of El Tajo. The town for me is like a poetic utopia, such beautiful imagery spiralling in every direction, simply perfect for writing. Plus, another poem The Dower House which is based on my experiences of working at Stoke Park Hospital, the poem also details the beginning of this institute and the various myths that surround it, such as The Grey Lady who was a ghost on horseback, sometimes sighted riding by Duchess Pond.

What did you do the day after you'd heard you won the Erbacce prize?

It took me several days to come down off the ceiling when I found out I won the prize, but I did go out and celebrate, and celebrate a bit too much! A three day bender followed by a three day hangover!! I had a week with an almost permanent smile that just wouldn’t go away, I was so tempted this year to enter again, but I think I’ll leave it. Personally I do think it’s one of the best poetry competitions around, not because I won it but because its free entry, I see so many competitions that charge the earth and if you are paying more than eight pounds per poem I think is far too steep I get fed up when poets are ripped off like this Anyway, the erbacce prize is definitely worth entering, and I’m so glad that I did, because for me erbacce press have published some of my favourite poets, and I respect everything they’ve done, both Alan and Andrew at erbacce have been so supportive. Plus, we have two events coming up soon with one for the Bristol Poetry Festival and another for the Bristol Festival of Literature where seven erbacce poets will be reading, those events will be towards the end of this year.

Who are you currently reading?

I’m currently reading a few books at the moment and have nearly finished Laureate’s Block by Tony Harrison, but I’m also reading Wine and Hashish by Charles Baudelaire, A New Acmeism by Sam Smith, Ghosts of Spain: Travels Through Spain and its Silent Past, which is research for my ‘El Tajo’ poems, plus Ping-Pong in the Rain by Knotbrook Taylor which won the erbacce prize in 2014, and ‘Guardians of Power’ by David Edwards which is another book I’m using for research for my Kinematophy poems.

Who would you recommend us reading?

I suppose anywhere really, finding the time mainly but I do try and read most days, and I do like reading several books at a time, time management is a big problem.

What magazines and websites are invaluable for a poet?

Well magazine wise I have a few favourites but then every poet has their preference, mine would be The Journal, The Seventh Quarry, and The Dawntreader, and I do like Lunar Poetry Magazine, websites I suppose would be New Pages, Poetry Markets, Poetry Library Website, and Literistic are great sources, all of these are essential for current news, new submissions, new magazines etc

Which poem of yours are you most proud of, and why?

Good question, I suppose I’d say Genocide and Ithaca poems and both of them for different reasons, the Genocide poem highlights the Armenian Genocide and what happened, I wanted to write something for the centenary plus I was disgusted by the media coverage of the event, a ten second clip on the news and that was it, I mean what is more important covering the centenary where 1.5 million Armenians, Greeks and Syrians were murdered or ten minutes of the royals attending another centenary for allied troops landing, it was disgraceful!

Ithaca I love, as I love the place and I love reading that poem it does mean a lot to me. I stayed in Ithaca last year and I will be returning one day as there is so much poetry that you can write about on that island, plus it reminds me of the two Greek poets I met and heard  read in Greek and English, and I have to say it was the best reading of poetry that I’ve ever heard, I’ve kept in contact with both of them and I’m hoping to do a reading with them next time I visit.

What makes a good poem good?

Well for me it has to have the correct imagery but not too much imagery, the meaning and focus of the poem to be apparent but not obvious, also clever rhyming and rhythm, again not obvious rhymes with any clichés do help. Experimenting with form and also the theme can make a poem stand out more. We can all write a poem about an event on the news, or the death of a celebrity, the me, me, me poems, yet tackling a theme in a different way or writing about a theme that is rarely written about, stands out for me, but poetry after all is subjective, but this is what I personally like in a poem.

Advice I suppose would be buy poetry books, attend open mics, submit, submit, submit, be a part of the local writing/poetry scene. Support independent presses, subscribe to magazines and support poetry because it won’t support you, read as much poetry as possible until you feel you’ve found your voice, be unique and try something new and different. I’ve come across poets before who don’t buy poetry books and then complain that they’ve been rejected and they wonder why!

Also don’t be put off by rejections we all get those, for example, when I started sending work out twenty odd years ago I sent 5 poems to five different magazines and they all rejected me, I then spent a lot of time developing my own voice and reading and buying different styles of poetry. I then re-submitted to the same magazines about a year later, and all five of those magazines accepted work by me, so, never give up trying if it’s really what you want. Plus, don’t clone the latest trend in poetry as most people will see through that even if you think people can’t, if you have the same style being performed again and again it does become somewhat tedious, but mainly enjoy it, and take that journey and the best of luck.

Divided into 4 zones Dystopia 38:10, by erbacce prize winner Matt Duggan is a masterful collection of imagist poetry. having heard Matt read his poems at various events through Bristol I couldn't help but have his voice in my head as I read this collection. But even if you come to it cold you couldn't help but be enthralled by the rhythm, imagery and emotion in these poems.

Many of them have a social edge, yet there is a wry humour in many. But it is obvious that the man behind the Angry Manifesto has much use for satire. Duggan plays with the language and manages to achieve what all good art should, he gets us to look at the world anew.

Poems about affairs with bacon and coming to terms with bald spots will entertain, but it is the more serious, the poems coming from anger at the world's injustices that will stay with you.