This week I have also been talking to Gareth L Powell about his book Hive Monkey, the new sequel to Ack-Ack Macaque.

My review of Ack-Ack Macaque as a reminder is here:

I picked up a copy of Hive Monkey at wfc2013, Gareth was a little surprised it was on sale as the official launch is January 2014. 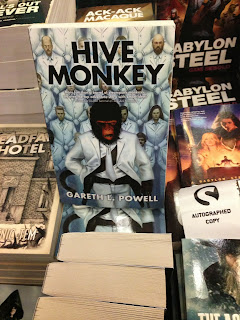 Tell me about the world of Hive Monkey – how is it different to our own?

GLP: Hive Monkey, like its predecessor Ack-Ack Macaque, takes place in a world that diverged from ours during the Suez Crisis. In our world, when the French prime minister proposed a political merger between Britain and France, Anthony Eden turned him down; but in my fictional universe, he said yes, because France and the UK had just secured a military victory in Suez (which they failed to do in our world). This means that in the world of Hive Monkey, European power rests in a commonwealth based around London and Paris, rather than a federation based around Paris and Berlin.

Also, there are huge nuclear-powered Zeppelins.
What are the challenges in writing a sequel as opposed to writing a standalone and how did you tackle them?

GLP: On the whole, writing a sequel was fun. It was fun to keep writing about characters for whom I’d developed a fondness. The main challenge I found was in deciding how much explanation to put into the book, for readers who may not have read the first one. Hopefully, I got the balance right...

Was the monkey always going to appear in a series?

GLP: The monkey started off as a character in a short story in Interzone. Then he got his own novel. Now it’s a trilogy. Who knows where he might go next...

If you could be a character from the book who would it be and why?

GLP: In some ways, I guess all the characters contain aspects of my personality, in so far as they came from my imagination. Given the choice, though, I guess I’d have to choose the monkey. I mean, who wouldn’t? He’s pretty much free to do and say whatever he wants. He doesn’t give a shit, and he gets to blow things up. He is absolutely the Mr Hyde to my Dr Jekyll.

What are you working on right now? (apart from this interview of course!)

GLP: I’m currently working on the third book in the Macaque Trilogy. It’s called Macaque Attack, and it’s out in January 2015.

GLP: I write while the kids are at school, and sometimes in the evening, after they’ve gone to bed. I don’t have a specific number of words I aim to get done each day; I just try to ensure that the words I write are good ones. I’d rather write 500 good words than 2000 mediocre ones.

GLP: This is the first novel-length sequel I’ve written, and I think it holds up very well against the first book. In fact, I think it’s even better. It takes the characters and themes from Ack-Ack Macaque and cranks the whole thing up a couple of gears.

This is very much an SF book, is there anything that draws you to this genre over any other?

GLP: I’ve always been a fan of SF, since before I could even read. So it makes sense that I write in the genre now. After all, if you write what you love, and you have fun doing it, that affection and enjoyment come across to the reader.

Overall - As with the first book there is a cinematic feel and I could totally see this as an anime film. It feel it’s too long to wait for the third book!
Posted by Unknown at 02:56