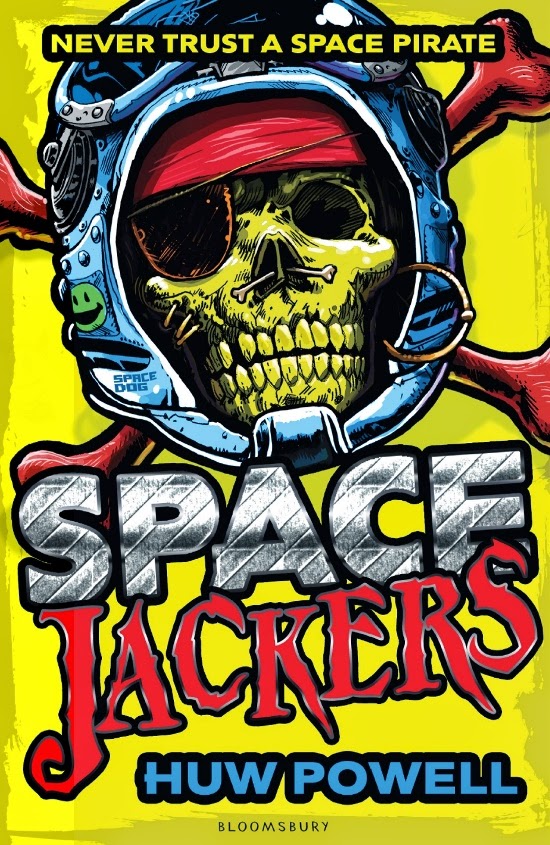 Huw grew up in the village of Pill in North Somerset, where he wrote his first stories for friends and family. He went on to study Literature and Art History at school and University. Huw started writing novels while working as a Project Manager in London. He now lives in Portishead with his wife and 2 energetic sons. When he's not sat at his computer, Huw enjoys watching films and spending time with his family. His debut novel, Rush Hour Rules, was a fast-paced conspiracy thriller. Spacejackers is his first book for children.

Huw has dropped in to talk about "The future"


By Huw Powell (author of Spacejackers – released on 3rd July 2014)

According to an article in the Guardian last year, children’s space stories are ready to take off again. SF Said has speculated that space will be the next big genre for children, following wizards, vampires and post-apocalyptic dystopias. Any why not? After all, we’ve got loads of great adult science-fiction, as well as a new Doctor Who, new Star Wars films, Star Trek reboots and the Oscar-winning Gravity. There are also exciting developments with private space flight and the International Space Station.


Is this why I’ve written Spacejackers (a new book series for children, being released on 3rd July)? No, it’s because I love the idea of space pirates! I’m not talking about the cartoon space pirates we see in Disney’s Treasure Planet, who dress like old sea pirates and fly spacecraft that look like sailing ships. I’ve tried to imagine what ‘real’ space pirates would be like in the future, cruising the galaxy in their battered old ships, searching for luxury vessels to spacejack.


But why children? Why not write for adults? Am I trying to become the JK Rowling of space? I would settle for a fraction of her success, but the real reason I write for children is because I find it immensely rewarding. There’s something special about taking a child on an adventure and feeding their imagination. It’s all about the story for them and anything is possible! We all have favourite books from our own childhoods, which shaped our view of the world and left a lasting impression. I find that some adults can be over sceptical and even snobbish about books.


There is another reason why I write for children. I have two young sons and I would like them to have the sort of books that I would have enjoyed as a child. There are very few children’s publishers who list ‘space’ or ‘science-fiction’ as a category on their websites (not even my own publisher, Bloomsbury). You have to search through ‘Adventure’ or ‘Fantasy’ or ‘Fiction’ to find anything close to it. I want to share my passion and inspire a new generation of space addicts.


This year, I’m supporting the Premier League Reading Stars project, which was set up by the National Literacy Trust and Premier League in 2012. The project works with thousands of schools and libraries, encouraging children to improve their reading skills. So why football? This was my first thought as I entered the Premier League headquarters in London last December. The project is for all children, but there is a strong focus on boys, because they read less than girls. The idea is simple, if boys see their football heroes reading and talking about books, it might inspire them to read more.


I was not surprised to hear that boys read less than girls, but how much of a problem is it? After all, my boys love their bedtime stories. According to the National Literacy Trust, over three quarters of the schools they surveyed reported that boys do not read as well as girls (Boys Commission Report, 2012). The reading gap is already evident at the age of 5 and by the time they reach 14, there are 12% less boys reaching expected levels than girls.


Why? Are boys any less intelligent or motivated?


The key reasons for boys falling behind are: peer pressure, reading not being considered cool, reading being perceived as something girls do, few male primary school teachers and librarians, few male role models seen reading and too many other distractions (e.g. phones, computer games, sports, etc). It appears that a vicious circle has formed, i.e. the less that boys see other boys reading, the more it seems like an activity for girls.


It’s not just primary school teachers and librarians, I’ve noticed that the majority of children’s authors, agents and editors are also female. Is this because more girls grow up passionate about reading? Does this mean that less and less boys will grow up to work in the industry? It’s hard to imagine a world without male authors: no Narnia, no Wonderland, no Treasure Island, no Never Never Land. At least we would still have Hogwarts!


So what’s the answer? How can we encourage children (especially boys) to read more? We can start by letting them see us reading for pleasure, as well as show an interest in their choice of books. There are national initiatives we can support, such as the Summer Reading Challenge by the Reading Agency. Author visits to schools and libraries can also help to inspire children. If all else fails, we can buy them book tokens!


Premier League Reading Stars is making a huge difference in schools. In 2013, three out of four participants made six months progress in ten weeks. Its website includes online challenges, resource packs and video messages from famous footballers. The project also arranges author visits and club events. In June, I was invited to Cardiff City FC stadium to talk with children from local schools. It was hard work delivering five workshops in one day, but it felt great to engage with the children and get them excited about science-fiction.
Are space stories ready to take off again? I certainly hope so, but if not, what will be the next big genre? Horror western? Detective romance? Medieval mutants? Personally, I would take a crew of space pirates every time. Ahoy there, my space dogs.