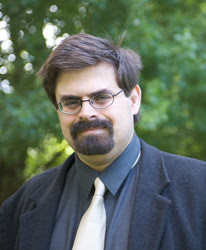 Adrian Tchaihovsky is the author of the Shadows of the Apt, an amazing 10 book series. He was born in Lincolnshire and studied zoology and psychology at Reading, before practising law in Leeds. He is a keen live role-player and occasional amateur actor and is trained in stage-fighting. His literary influences include Gene Wolfe, Mervyn Peake, China Miéville, Mary Gentle, Steven Erikson, Naomi Novak, Scott Lynch and Alan Campbell..

A full bibliography can be found here


For anyone that hasn’t read them can you tell us a bit about your books?

That’s suddenly become a more complicated question that it used to. I’m currently known for the Shadows of the Apt series – ten books from Empire in Black and Gold to Seal of the Worm that deal with a world of insect-inspired humans facing a war that brings not just devastation but fast-paced technological and social change. It’s an epic fantasy, but I hope it also brings a lot of new ideas to the table – both in the insect-kinden themselves and in the way the book and the world develop over the course of the series – changing from a classical/medieval sort of setting into something closer to an alternate world 20th century. That series is complete now, though, and next year I’ve got two new books coming out, my first long-form fiction that doesn’t follow the exploits of the kinden – one fantasy and one science fiction.

“Last book” is also a rather fluid phrase. I hit the ground running with 5 books finished by the time Empire was published, and I’ve managed to stay ahead of the game ever since. The next book out, though – which means more, both to me and, hopefully, to readers – is Guns of the Dawn, which I’ve called “Jane Austen meets Bernard Cornwell (by way of Ursula le Guin)”. It’s set in a secondary world, but one that bears more than a passing resemblance to 1800s England. Emily Marshwic is a practical-minded young gentlewoman in the Eliza Bennett mould, there is a war on, and she ends up in the army not because she’s following a sweetheart or pretending to be a man, but because the war is going sufficiently badly that there’s a draft of women. Suffice to say, things go downhill for her from there.

With Guns, one of the main differences is that Emily is the only point of view character, contrasted with Shadows of the Apt where the narrative skips between a reasonable number of them. One reason is that Guns is a more personal story, and smaller in scale – not the empire-spanning epic, but more about personal heroism and tragedy. Looking at next year’s other new release, Children of Time (formerly Portia’s Children – and disputes over titles with one’s publisher is probably worth an interview in and of itself), this is a SF book, spaceships and alien planets and the lot, and the thing I learned about writing with this one is “research is hard.” I am conscientious about the science – which doesn’t mean that there isn’t some magicianly hand-waving going on at the key concept level, but because of that I did my level best to make everything else at least borderline plausible.

I think the big thing is that I plan ahead a lot. I tend to have a chapter by chapter plan, and whilst this often changes and shifts about (especially the 2nd act) during the writing process, I usually have a clear idea of what’s next. In turn, this tends to keep the wordcount up, as I generally know what’s immediately next whenever I sit down to write.

Not as many as I’d like. These days I tend to write when I have a commission, or for submission for a particular anthology or opportunity. I’d like to be able to just write short stories for the hell of it, and try to place them afterwards, but time constraints make that a tough sell.

Long form fiction is my first home, really. I like being able to spend time creating the world and the characters. Short form is a very different art – some way along the scale that runs from epics down to poetry, where the further you go, the more every word weighs, and the more economy of expression (always a virtue, but so much more of a necessity as you get shorter) becomes paramount. With very short fiction – 1000 words, say – everything counts. This leads to a lot of neat, clean single-issue stories, and if an idea can be said in 1000 words that’s a good argument that you shouldn’t use 2000 on it. However, there is a limit to what ideas can be condensed like that, and to how well you can explore such ideas – short stories are very good at setting up questions, not so much for considering answers.

I want to say Tisamon. Tisamon’s lean and deadly and fast, and he’s vastly skilled with a blade, and he’s tragic. He’s the proper hero that a fantasy story cries out for. But I’m not Tisamon. I’m not even Thalric, the sneaky, hard-edged bastard, though I do enjoy writing for him. Stenwold and Che are the heart of the book: the two clumsy, doubting Beetle-kinden from the kinden’s nascent and rather ropey democracy. They bumble through the books doing their level best, and getting beaten into shape by a variety of unpleasant events and reversals. Che goes from the fifth-wheel awkward teenager to a woman whose shoulders are broad enough to hold the fates of thousands – and she does it herself, no prophecies or magic swords. Sten is the idealistic demagogue who lives long enough to find himself on the brink of becoming a monster through spending so long fighting them: a middle-aged, middle-class hero, heir to all the familiar human failings.

There are a couple of moments in War Master’s Gate that still get me. It’s hard to say much about them because of spoilers, but the fight at the gates of Collegium is one, and the later exploits of Eujen, Averic and Straessa in the city. Hopefully people who have read that far know what I mean.

I was fifteen years in the wilderness of the slush pile before I got anywhere. However, while that sounds bad, I will freely state that my early work was, well, Not Very Good. If I had been in a position to shove that stuff out there as it was (and at the time I was entirely convinced of its wonderful quality) then the results would have been less than readable. Over those 15 years I wrote a lot of books, each one hopefully better than the last. With Shadows, I wrote the first plot arc (books 1-4) and caught the attention of an agent with Empire. This was at a time when the major publishers had pretty full lists, but the fact that I had books ready to roll, that could be released swiftly and without fear of an attack of writer’s block, enabled my agent to crowbar me into Tor UK’s good graces.

This is a hard question to answer, these days. Never underestimate the value of a good editor, whether provided by a publishing house or a freelancer you’ve engaged yourself. Another pair of eyes, another discerning point of view from someone who has a licence to give you something other than unqualified praise, is always going to be useful, no matter how good you are. God knows I need it.

Many thanks to Adrian for popping by and chatting to us!