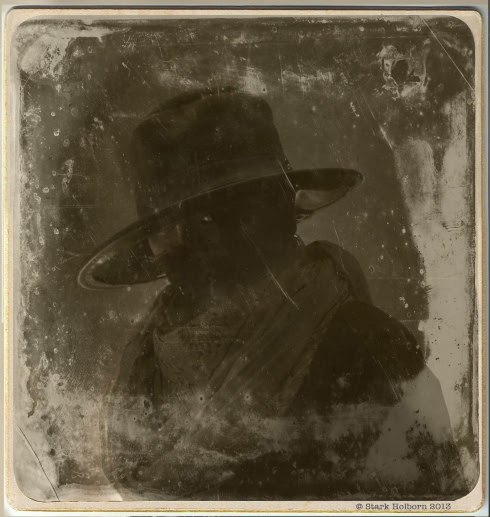 Small time liquor bootlegger, purveyor of Penny Westerns and author of Nunslinger.
Stark Holborn is an enigmatic character with a six-gallon hat and a past shrouded in mystery. Nunslinger is Stark’s first published work.
We at Bristol Book Blog caught up with Stark and Hornswoggled an interview whilst Stark was busy breaking in a fractious Equus Ferus right here in the Mild, Mild West:

Despite its pulpy title, Nunslinger is a traditional Western: it was originally told in good ol’-fashioned, penny-Western, serialized format – only with ebooks – with installments spread across the year. The Complete Series paperback is a collection of all twelve novellas.

They tell the story of one Sister Thomas Josephine, a young Visitandine nun who sets out from St Louis, Missouri towards a mission in California. When an attack on her wagon train leaves her stranded in Wyoming, she finds her faith tested and her heart torn between Lt. Theodore F. Carthy, a man too beautiful to be true, and the mysterious grifter Abraham C. Muir. She ends up being falsely accused of murder and goes on the run… you get the picture! While it’s packed full of Western-style adventure, it also has a more serious side. Sister TJ is a complex protagonist who constantly finds herself coming up against murky morality of the frontier and its inhabitants.

Well now that’s a tough one! So happens that I write under a range of pseudonyms… can’t be that you’re asking me to give away one of my secret identities?

<Gosh darn it, no bushwacking Stark now is there?>

To be honest, writing Nunslinger has been the best lesson in fiction writing I could have hoped for. Due to the serialized format and the tight publication schedule, I think I worked out that I wrote something like 180,000 words in nine months. It taught me to write quickly, and more importantly, to make decisions quickly: more than once when a book wasn’t working, I went ahead and scrapped the whole thing and started again, even with limited time. It taught me to follow my instincts when it comes to characters and action, rather than trying to over-plot things. On a practical level, it’s been like writing, editing and proofing a novel twelve times, in miniature. Of course, it was made easier by the fact that I had an absolutely amazing editor (and editorial team) supporting me. 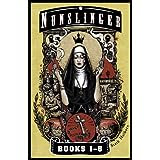 I’ve been lucky enough recently to make writing a (mostly) full-time gig. Practically, it really depends on what I’m writing, but generally I work best in the mornings, before 2pm. If I’m on a deadline I tend to get up, brew a jug of coffee and get to work (that often means not getting dressed until after lunch: the postman has learned this now). In the afternoons I tend to review and edit and do “life admin”. If I’m on a really tight deadline, I’ll start writing again before / after dinner, if needs be. I don’t usually write after midnight. In reality, there’s probably only about 4 hours of intense writing time in all of that: the rest is staring, writing involves a lot of staring into space and making drinks of various kinds.  If I’m not quite so hectic, then I won’t work as much in the evenings, but mornings are always writing time.

Increasingly! I hadn’t written many before, but now I’m in the habit. (Sorry – pun). I tend to write in scenes anyway, or chapters of not more than 2-6 pages. Short stories are a great medium for honing technique, especially in terms of developing characters over a short period of time.

Short form merging into long form? Is that a cop out of that question? I get very jealous sometimes of poets and songwriters, at how they’re able to condense so much into a limited space. There’s a singer-songwriter called Anais Mitchell who writes the most wonderfully evocative, economical lyrics. (I listened to one of her albums on repeat when I was writing a few of the Nunslinger books). I haven’t tried flash fiction myself, but I guess the same rules apply?

Sister TJ is the obvious choice, although a strange one: I’m an atheist and she’s… well, a nun. But in many ways her faith is based in her strong sense of empathy, her desire to try and make the world better in small ways –  to see and treat people as human – and that’s something I feel strongly about too.

Hmmm… It’s a funny thing, liking your own work. If I like something, then I always have the fear that it’s not very good. Usually, I’ll be cautiously optimistic, but very aware of the thing’s flaws. It so happens that two of the Nunslinger books, both which I detested at the time and saw me wallowing on the floor in despair, were my editor’s favourites. I didn’t see it then, but now, with a bit of distance, I agree with her. The things I thought made them awkward, or dull, were actually their best features. Overall, I think being satisfied with your own work is a dangerous thing: sometimes it’s the things you can’t see or don’t appreciate as an author that most interest other people.

Yes, the manuscript for my first novel was yanked out of the slush pile by my agent, Ed Wilson. I was pretty young and naïve, and had basically sent the thing out on a whim, because I thought: well, what’ve I got to lose? The novel wasn’t even finished! Anyway, he worked with me on that until it was, then we submitted it to publishers. There was some interest but it was just too weird for anyone to pick up. In hindsight, I’m actually really grateful for that. It meant that I had to put it aside, and start writing something else. My agent likes to remind me sometimes that he still has that original submission in his office, which makes me squirm…

Go and write; it’s like playing the piano, the more you do it, the better you’ll be.

Many thanks to Stark for answering our questions!
Bristol Book Blog is giving away two copies of Stark's book, the complete Nunslinger! Here: http://brsbkblog.blogspot.co.uk/2014/11/book-giveaway-nunslinger.html
Posted by Unknown at 06:40