After teaching literature, philosophy, history, and religion for more than a decade, Brian began writing epic fantasy. His first book, The Emperor’s Blades, the start of his series, Chronicle of the Unhewn Throne, won the David Gemmell Morningstar Award, the Reddit Stabby for best debut, and scored semi-finalist spots in the Goodreads Choice Awards in two categories: epic fantasy and debut. The second book in the trilogy, The Providence of Fire, was also a Goodreads Choice semi-finalist. The concluding volume of the trilogy, The Last Mortal Bond, is available for from TOR UK on 24 March.

Brian lives on a steep dirt road in the mountains of southern Vermont, where he divides his time between fathering, writing, husbanding, splitting wood, skiing, and adventuring, not necessarily in that order. He can be found on Twitter at @brianstaveley, Facebook as brianstaveley, and Google+ as Brian Staveley. His blog, On the Writing of Epic Fantasy, can be found at: bstaveley.wordpress.com. 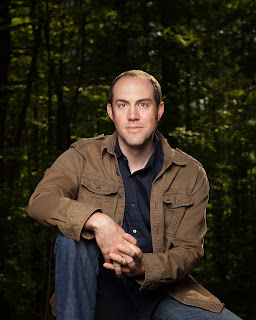 Brian dropped by to talk about reading:

One of the cruel ironies of the writing life is that it involves so little reading. I’m sure there are writers out there who manage to churn through a few novels a week while working on their own manuscripts, but I am not one of them. Some days, when I close the computer, I would rather do anything—sled through the fire pit, sort through my underwear drawer retiring the old pairs, sort through a complete stranger’s underwear drawer—than look at and think about words. Reading during the day, on the other hand, feels self-indulgent, almost lazy. Reading, after all, is recreation. The day isn’t for recreating; it’s for writing my own damn books.

This line of thinking, of course, is a mistake. You can’t write without reading any more than you can breathe in without breathing out. When I spend too much time on my own work, I find my pages growing stale, rehearsed, repetitive. I need all these other voices in my head, voices working in my own genre and others far afield from it. Without the constant infusion of fresh thoughts, characters, worlds, words, I’d end up writing the same story over and over in marginally different ways.

Sometimes what I get from reading is as simple as a word. Reading has a great way of shifting forgotten or neglected language into the working vocabulary. Farrago, for instance. I’d forgotten all about farrago! Or actinic, which I used once because I couldn’t resist, even though I worry it might be a little anachronistic.  The danger here, of course, is that you can rediscover a new word and get carried away. Just the other day, a good friend of mine, after reading half a dozen chapters of my new manuscript, sent me this email: “You are only allowed one ‘lambent’ per book... the current count is 3, putting you at an estimated 9 by the time you are done. Similarly, you've already used up your ‘flensed,’ so don't try it again.” I’m told I’m a little too fond of “ambit” as well, but I have friends for this very purpose: someone has to tell you when you’re getting too frisky with the English language.

Reading also pushes the boundaries of my thinking about what’s formally possible or desirable. Of course, I’m well aware that some things—like sliding a green bean all the way into one’s sinuses—may be possible without being desirable, but the best writers have a way of eliding the boundary between the two. Joe Abercrombie, for instance, has a chapter in The Heroes, a tour-de-force that follows the battle through the logic of the killings themselves; when a point-of-view character is killed, the POV shifts to his killer, until that person is killed, when it shifts to the next killer. I wouldn’t have imagined the approach could work—it seems too disjointed—but the pell-mell, unpredictable whipsaw pull of the thing is the whole the point.

Or take N.K. Jemisin’s novel, The Fifth Season. She writes a good chunk of this in the second person, a point of view I used to think was appropriate only for Choose Your Own Adventure novels or uncomfortable introductions to speeches: “You, Charles, chose a different path from the rest of us…” Jemisin’s handling of it proved me completely wrong, opening up an entire stylistic avenue for future exploration.

The disappointing books can be just as instructive as the brilliant. It might seem like an odd educational method—aspiring chefs probably don’t have much to learn from my recipe for jello-shots; bluegrass players might do best to steer well clear of my three-year-old son plinking on the banjo; budding cartographers stand to learn nothing from my wife’s sense of direction, a sense that insists on rendering the three-dimensional topography of the world in a single dimension, a line that somehow connects Vermont, Boston, New York, and Florida, and Greece—and yet, I find I learn a lot from the books I don’t really enjoy, the ones I put down.

Whenever I give up on a book, I ask myself why. Occasionally, there’s an overt problem: miserable prose, piles of obvious factual errors. Much more often, however, I abandon a book because something is lacking. It can take a while to figure out what that something is. Just last week, for instance, I started a fantasy novel that had a great premise, engaging characters, an unusual setting, and an interesting mystery. Still, curmudgeonly asshole that I am, I found myself bouncing off of it. I read on a few more chapters before realizing my problem: I couldn’t see anything. I had no idea what anything looked like in this vast, imaginative world, no sense of the colors or contours, no conception of the spatial relation between anything described, on either a large scale or small. Whenever I have an experience like this, it’s a reminder to go back to my own work and to make sure that the things I see inside my head are actually there on the page. “Oh yeah,” I’ll realize. “I forgot to mention the fact that she has a sword sticking through her liver.”

In the end, most importantly, reading reminds me of the joy of stories. I might feel more like cracking a beer than a book after my son is in bed at the end of the day, but the beauty of life is that I can do both, and almost inevitably, after the first few pages a new book begins to work that ancient spell, the one where you slip from this world into another, find yourself lost, and delighted to be so. Any writer who forgets that feeling might as well get out of the game.

Thanks to Brian for his interesting post! Go check out his books - https://bstaveley.wordpress.com/
Posted by Unknown at 13:22