Why isn't there a minister for men? 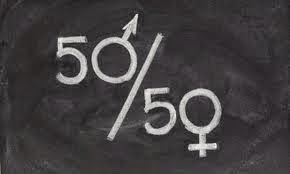 On Facebook during the latest cabinet reshuffle a friend posted a link about the new minister for Education, who also has the role of Minister for Women and Equalities. One of the comments in the discussion was about how the Minister for Women was a side show for a full time role.

Although this is actually a step up from what it was before this reshuffle where the minister for women wasn't even a cabinet post - http://www.fawcettsociety.org.uk/new-minister-for-women/#sthash.plALEjCh.dpbs

Commenting on this someone wondered why there wasn't a minister for men? I thought it'd be obvious but luckily the New Statesman ran a piece on this so I posted that link - http://www.newstatesman.com/media-mole/2014/04/why-isnt-there-minister-men

Apparently though having a minister for women and not one for men was a "double standard". This I don't understand at all. I am reminded of my post for Literature Works - http://www.literatureworks.org.uk/Book-Features/Special-Features/Thrillers-are-from-Mars-Romances-are-from-Venus which resulted from a similar argument about gender inequality.

However seemingly the role should be called Minister for Gender Equality because, you know, think of the poor men! With their privilege, their unequally higher pay, their over-representation in positions of power, their facing of everyday sexism Of course the Ministry for Equality should also really ensure that White & Straight people are fully represented, wouldn't want them to be discriminated against would we?

Mind you, if the person who was making the point, was trying to say that the problem was similar to the point I made in the Lit Works post, that by saying women's issues were ONLY of interest to women (and therefore, by implication, 'beneath' men's consideration) then I may have been in agreement. But it was difficult to believe this as he made his point by using a sexist joke, which, by the way is never OK. I would also say that the fact there is a "Women's Fiction" and not a "Men's fiction" comes from a different place & marginalises women rather than seeking to provide parity.

I am a white man and understand that I therefore have a privileged position because the world is generally run by white men. What I can do, the least I can do, is not to sit by and be a polite bystander and call people out about it when they are being sexist, racist or homophobic.