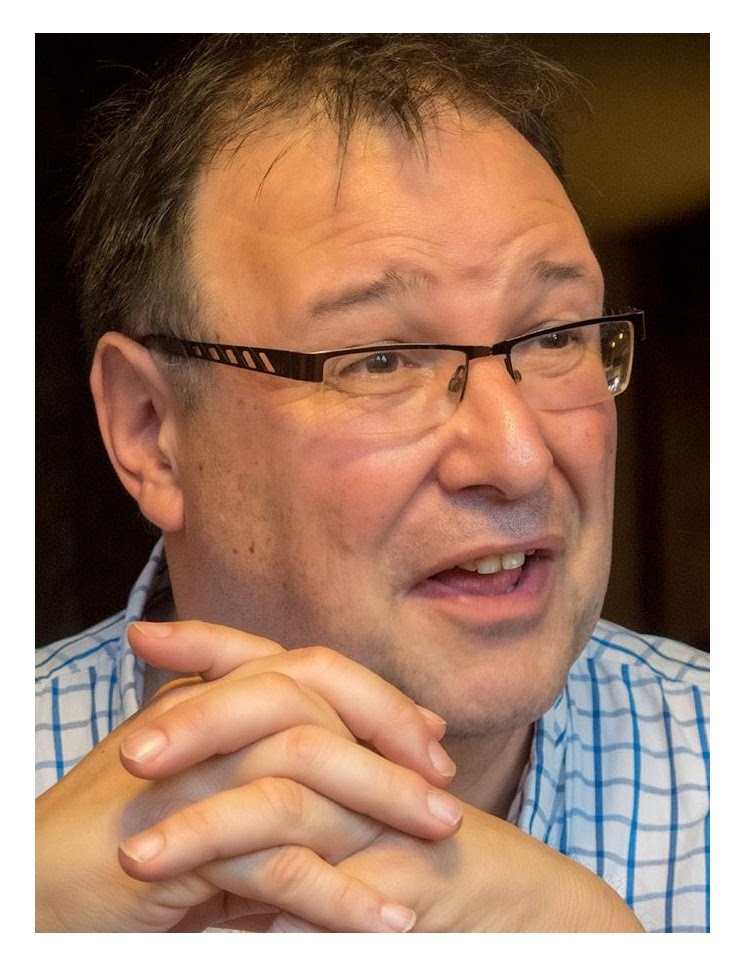 Ian Whates lives in a quiet Cambridgeshire village with his partner, Helen, and Honey, a manic cocker spaniel.  Ian is the author of six novels to date, most recently Pelquin’s Comet, released in April 2015. Also, the  Helen, a manic cocker spaniel, and a tailless black cat.  He City of 100 Rows trilogy (Angry Robot), and the Noise duology (Solaris). Sixty-odd of his short stories have appeared in various venues, two of which were shortlisted for BSFA Awards, and his second collection Growing Pains (PS Publishing) appeared in 2013. Ian has edited some two dozen anthologies and in 2014 one of these, Solaris Rising 2, was shortlisted for the Philip K. Dick Award. He has served a term as Overseas Director of SFWA and spent five years as chairman the BSFA, stepping down in 2013. In his spare time Ian runs multiple award-winning independent publisher NewCon Press, which he founded by accident in 2006.

Ian dropped by to talk about his latest book - Pelquin's Comet. His interview & a review of the book below:

This is the first in a trilogy I believe – can you give us an overview of what they’re about?

I’ll try to do so without giving too much away…  The books are set in an age of expansion, with humanity spreading out into the stars aided by caches of ancient alien technology which they don’t fully understand.  Humanity has encountered its first extant alien culture, the Xters, and the two races eye each other warily across ragged and fairly arbitrary borders, not really competing for habitat due to physiological differences, but not trusting each other either.  This first book centres on the crew of a small independent trading ship, Pelquin’s Comet, who have a lead on a cache of Elder tech that they hope will make them rich.  In order to fund an expedition to recover it, they take a loan from a bank.  The bank insists that their agent, Drake, accompanies them to safeguard the bank’s interests.

They are not the only parties after the cache and soon find themselves in a deadly race to reach it first.

Drake provides the over-riding story arc.  He has a hidden past, one that comes back to haunt him as the series progresses, starting in this first book, as he encounters familiar faces and places he never expected to see again.  He also has a companion, a small cuddly bundle of fur called Mudball whom everyone assumes to be a pet but is actually an alien entity with an agenda all its own.  As the series progresses, the secrets multiply, Drake’s past comes ever more to the fore, the true nature of the Elder caches is revealed, and the future of humanity itself hangs in the balance as a result.

I’d say this was carefully plotted, how much planning did you do?

Thank you, I’m glad it comes across that way.  In all honesty, not as much as you might think.  I tend to write in an organic fashion, generally setting out with a loose plot in mind and seeing where my characters take me – which often proves to be in directions even I hadn’t anticipated.  This book is no exception.  I had the four central characters – Drake, Pelquin, Mudball, and Leesa – fairly well established in my head and knew where I wanted to take them by the end of the book.  Beyond that, many of the plots and twists that actually brought them there developed while the writing was well underway.  One of the earliest chapters to be written was the one exploring Leesa’s childhood on the strange colony world, her sense of not belonging and her first encounter with an Xter.  This proved useful as it gave me a solid grounding for writing Leesa as a damaged adult.

If you could be a character in the book who would it be and why?

Drake.  He’s the one with a hidden past, the one in a position of authority, and he’s the one for whom life is about to get even more interesting and dangerous as the series evolves.  Because of his hidden past, he’s very in control, guarded, careful not to reveal too much about himself… and then Leesa turns up.  I enjoyed exploring his reaction to her and the threat she represents.  I also envy his analytical mind, which comes to the fore when the ship is impounded by port authorities, bringing a touch of the Sherlock Holmes to his character.  Wouldn’t it be lovely to make connections and piece situations together with such clarity?

What did you learn about writing by writing this book?

The importance of patience and revisiting your work after a ‘fallow’ period.  In all honesty this is nothing new – all writers know the wisdom of setting your work aside for a while and coming back to it with fresh eyes, but it isn’t something I’ve always put into practice.  I did here, and Pelquins Comet is the most revised text I’ve yet written.

When will the other two books come out?

Good question.  I’ve started volume 2 but have had to set it aside for now while I concentrate on something else.  The plan is to return to it shortly and I’d hope to have the book out by next year, with volume 3 in 2017, but we’ll see.

You’ve mentioned that there is a nod to Firefly here, which in itself was a nod to Blakes 7. What is it about the ensemble cast in a small vessel playing fast and loose with the law that inspired you?

A group of rogues operating at the very edge of legality and a little beyond but possessing their own moral code that we can all recognise…  The situation offers such opportunity for drama.  The simple introduction of a stranger is enough to disrupt the established dynamic.  Throw in a quest, a threat or two, a mystery or three, and a twist or four, and away we go.  What’s not to love?

Why did you choose to have a banker as one of your main characters?

I did so for a number of reasons; in part because it seemed such a perverse notion but also entirely logical.  If a financial institution is about to entrust a large sum of money to strangers, they would want safeguards, a representative on the mission.  It also gave me the perfect opportunity to play around with a situation that’s always intrigued me, that of a close-knit group having an outsider forced upon them.  All sorts of dynamics come into play as a result – the resentment of Nate towards the banker, the uneasy clash of authority between Drake and Pelquin among them.  Besides, I can’t think offhand of an SF adventure series that’s featured a banker as central character before…

How much input did you have into the cover art?

In some senses quite a bit, in others not a lot.  To explain, I trust Jim Burns and have worked with him before.  At outset I sent Jim a couple of snippets from the text that described the ship, Pelquin’s Comet, and left the rest to him.  Not sure what I would have done had I hated what he came up with, but fortunately I absolutely loved it.  Jim really delivered.  To be honest, it never occurred to me that he wouldn’t.

It felt like you’d had a great deal of fun writing this, what did you enjoy the most about writing this book?

I did have a lot of fun, you’re right.  I loved creating the different societies – from the hi-tech fast-paced banking capital of New Sparta, to the knock-off gang-infested world of Babylon, from the superficially civilised Brannan’s World to the Xter-dominated frontier world of Leesa’s childhood, Liaise.  I loved the interplay between the characters and the wealth of secrets hidden by so many of them.  I loved writing the wise-cracking Mudball and hinting at his real intentions, and I loved thinking up the different wonders found in the cache chamber and writing the action sequence that occurs towards the book’s finale…  Most of all, I think I enjoyed taking established SF tropes such as alien caches bootstrapping humanity to the stars and turning them on their heads.  Yes, I really have had fun writing this one, and look forward to continuing the story.

In one sentence what’s your second best piece of advice for writers? (since I have your first best in the last interview)

Hey, that’s unfair, I cheated last time and actually gave you two because I couldn’t choose between them (don’t take rejection personally and join a writers’ group).  Okay, something new…  Write short stories.  Even if your real ambition and focus is the novel, you’ll gain so much from mastering the shorter form – in a short story you have to establish character and setting in a few deft sentences as opposed to doing so over the course of chapters – that sort of discipline, that ability to make very word count, will stand you in good stead whatever you then go on to write.

Many thanks to Ian for taking the time to providing answers

Take an ensemble cast in a Fireflyesque small trading ship, add a dash of secret backgrounds, a banker, an alien and a treasure cache. Stir gently with memorable characters and locations. Add a dash of wisecracking language and what you end up with is a highly entertaining space opera. Mr Whates obviously had a great deal of fun whilst writing this and it's bound to rub off on you when you read it. It left me wanting more, which is the point of a first in a series isn't it?

I wanted more of the mysterious aliens that left behind a treasure cache and note that there is the promise of revelations in the future with keen anticipation. The universe building is deftly done and this is a tightly plotted book. My only, very minor, grumble was with the treasure cache itself. I would have liked to have seen more made of it, both in the heist part itself and in the possibilities of the treasures.

Really looking forward to the next one!