Getting the tentacles into Bristol Festival of literature 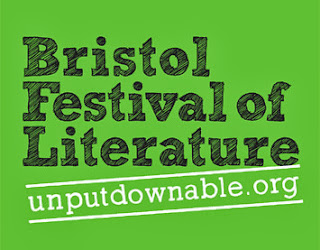 BFL is just round the corner (starts on the 19th – go here for details: http://unputdownable.org/events ) as a member of the core team, I've put together the Kraken Rises! and Citywide Tentacle parts. I’ll be at a bunch of other events, I may even be hosting some other events but my blood sweat and tears have gone into the tentacular events.


The Kraken Rises! & Citywide Tentacle are similar events, both being variations on Exquisite Corpse really but started out separate. Citywide story ran in the first year of the festival and was a lot of fun and people seemed to miss it last year so we decided to run it again.


The Kraken Rises! started as a conversation with Jared Shurin (http://www.pornokitsch.com/) at a Kitschies event and from that initial seed has grown into a vast tentacled beast of an event. With 4 venues, 6 authors, 2 publishers, the Pervasive media studio, a bookshop and more all working together. It’s a little bit mad to be honest. Participants will arrive at 10:45 at the Festival Hub (The Parlour on Park Street just opposite College Green) to be briefed and receive their goody bags (with books kindly donated by Wordsworth Editions and Solaris and other goodies provided by Hodderscape and some of the participating authors). After the briefing they’ll make a book, yes they’ll physically make a blank journal, with local publishing co-op Vala. They’ll then be let loose to start creating their stories (based on the brief given to them). It is optional but potentially of use for them to attend the next event in the Parlour called “Kickstart your imagination” and there are 6 authors to consult for writing tips until 4pm. (Dave Gullen http://davidgullen.com/, Jonathan L Howard http://www.jonathanlhoward.com/, Tim Maughan http://timmaughanbooks.com/, Emma Newman http://www.enewman.co.uk/, , Gareth L Powell http://www.garethlpowell.com/ and Gaie Sebold http://gaiesebold.com/ )


Participants can spend as long or as little time as they want in the 3 participating venues, which will be open between 12 and 4, getting tips from the participating authors. There are also a few fun activities at the venues including a digital workshop, a short film, practising cut up technique and a digital audio demonstration.


At 4pm we’ll release the authors back into the community and await the results of the day. Everyone gets the opportunity to send us their stories by the next day. We’ll choose 10 of the best and those lucky few will be published by Angry Robot in an anthology that will raise money for the festival. We’ve already run a competition to design the cover and our judges are currently debating who should win the art prize.


The winners will be informed at Bristolcon and the Unputdownable Speakeasy (as they may be at either event). There will be a first, second and third prize in addition to being published with prizes kindly donated by Penguin and Stanfords and maybe some others. I think that £3 per person (£2.50 concessions) is really good value for a very fun day. It has been a lot of hard work behind the scenes to organise it & I’m really hoping that it is going to be well attended and that those that do attend will have fun.


The citywide tentacle will run at 3 separate libraries in the city. One will write the beginning of a story about the apocalypse, the next will write the middle of the story and the last will write the end. The whole story will then be read out at the Unputdownable Speakeasy.


I am also very happy that Toby Litt agreed to appear at the festival and hope that lots of people will come and see him . Also glad to say that the Bookshop band (http://www.thebookshopband.co.uk/) will be appearing at the Speakeasy. I may have had a small hand in those two things.


The rest of the festival looks really good this year and I am sad to not be able to go to everything. As well as Toby Litt and the Speakeasy I will be at High Performance, the short story prize, Fear in the caves, Word Karaoke and the Writers Conference so drop by & say hi.


On the Saturday I’ll be appearing at Bristolcon on a couple of panels (Creating a culture & how science got it’s groove back) details here: http://www.bristolcon.org/wp-content/uploads/BristolCon13-Programme.pdf before piling a bunch of people in a taxi an hotfooting it to the Speakeasy. The program for Bristolcon looks great this year & I’m really looking forward to it. However there are some extra special things happening in BFL land too including Football, Street art and Andy McNab!
I’ll hopefully be online every day of the festival blogging about the highs and lows. I hope to see you there!
Posted by Unknown at 06:40