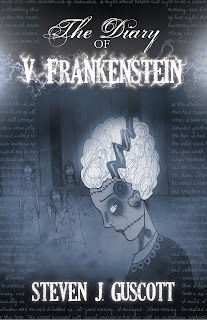 On May the 7th I had the joy of attending and showcasing my own work at Sheffield University’s event, Re-Imaging the Gothic: Monsters and Monstrosities.

At the beginning of the year I submitted my current novella, The Diary of V. Frankenstein in the hope they would be willing to have it, and me, as part of the event. They read the story and invited me to attend the event and give a presentation about the creative process of re-imaging a classic such as Mary Shelley’s Frankenstein. 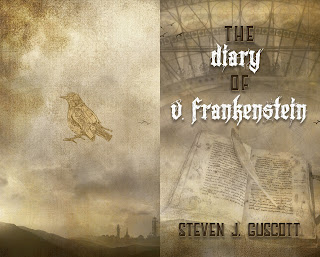 I arrived at the event, held at Sheffield Universities Humanities Research Institute building, and the organisers were incredibly welcoming. I set up the stall for the showcasing and had a chance to chat to a number of those running the event and those who were interested in The Diary of V.

Frankenstein. I also got a chance to look at the other showcases and there was a lot much creativity and talent on display. For full list of all showcases, presentations and information on the event click the link at the bottom to Sheffield’s Gothic Reading Group blog. The blog will also have a post about the event and all that went on shortly so keep an eye out for that.

Throughout the day there were a number of other presentations on the events theme and I enjoyed every single one. I shouldn’t pick favourites, as they were all wonderful presentations on re-imaging the gothic, but I can’t help but give praise to the reading of Greg Flynn’s, ‘Humans of New Britain.’ The piece that was read was exceptionally well written and very passionate about current political, social and economic state of Britain at this time.

At 3pm I got the chance to give a presentation on the creative process of re-imagining the gothic and how it relates to the year’s theme of Monsters and monstrosities. To begin with I focused on what the theme monsters and monstrosities meant to me personally and how such ideas have bled into the creative process of writing, The Diary of V. Frankenstein. I then discussed how such a fantastic story as Frankenstein has sparked a thousand adaptations, and that to me it is the themes of holding a mirror up to ourselves and society that make people keep coming back to Frankenstein.

With this foundation built, I went on to discuss how my re-imagining began in 2010 with a simple thought of ‘What would happen if?’ at a certain point in the Frankenstein story. A year later my publishers helped me have the confidence to explore my ideas for their short story steampunk anthology, Strange Tales from the Scriptorian Vaults. Writing something that pays tribute to such an epic story is daunting, but we managed to piece it all together.

The short story gained some interest from readers and a friend of mine said she would love to see more about one of the characters. Another year later, while thinking what to write, I decided to turn the short story into a novella and explore that character and themes of monsters, equality and feminism more.

In my presentation I talked about how the publishers read it at the end of 2015 and agreed to publish it. It was a wonderful creative process with much learning on my part. During the editing process we came up with an extra layer to The Diary of V. Frankenstein and made two versions; one with the original Victor Frankenstein and one with Victoria Frankenstein- with all the male characters swapped with female and vice versa. I concluded with this and how the publishers had published the paperbacks and ebooks, but also the limited edition hardbacks where one set was the Victor version, and one the Victoria version. Lastly, I invited everyone to come speak to me about The Diary of V. Frankenstein if they wanted to know more.

There were a few more presentations after mine and for the rest of the event I chatted to people and got to relax a little now my presentation was over. The event was wonderful and a great way of mixing academic perspectives with a public audience. I really look forward to seeing what they do next year and returning as a member of the public and not showcasing/presenter. I highly recommend everyone keeping an eye on the gothic-lit blog and attending next year’s event. It was well organised and well presented event, so many thanks to Sheffield University Goth-Lit department for organising it.

Steven’s Website: Information and purchase link for The Diary of V. Frankenstein and all his writing.
www.stevenjguscott.com