I'm a librarian with a background in classics and law, I live with an engineer and very grumpy bearded dragon, and I fill my spare time in between writing with web design, geeky cross-stitch and DIY (which may or may not involve destroying things).

My writing swings wildly depending on what is in my head at the time, and this has led to genres including urban fiction, steampunk-style fantasy, and a series of children's stories based on a library that I used to work in. My favourite character is a sloth with a speed addiction, my best writing moment was when one of my characters fell in love and completely changed the plot, and I write because I can't imagine not doing it - and it gets the voices out of my head for five minutes...

News and thoughts on my writing can be found at www.writingandcoe.co.uk, and I'm on Twitter @writingandcoe. Come say hi!

Kate has dropped by to talk about the discoverability challenge 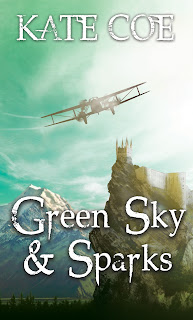 The GreenSky series is set in a world of magic, Renaissance technology and electricity, and I’m very much a character author - I love telling stories about people! I’d probably also use the word “delightful” after my wonderful friend @O_T_Curtis repeatedly squeaked it... I also write short stories which are less delightful but possibly more fantastical, and I’m working on an urban fiction that promises to be not-at-all delightful (unless you like assassinations).

I’m currently re-writing the fifth novella in the GreenSky series, Empty Skies & Sunlight, and also working on the tenth, Bright Spark & Sunrise. I’ve usually got several projects on the go so I’m also in-progress with an urban fiction trilogy (well, I like assassinations), three short stories, one Dresden Files fan-fiction piece and several blog posts. It stops me getting bored, I suppose...

Why did you decide to do the discoverability challenge?

I’ll echo Jo Hall; because it’s needed. Because I’m sick of the same names coming up in lists, and getting blank stares when I mention a favourite author that I’m astonished more people haven’t read (Emma Newman? Jen Williams? AFE Smith?). I’m fed up with authors that I dislike being held up as brilliant examples, when I don’t like them and I don’t want to read them! But as a bonus, the Discoverability Challenge was as much a challenge for me to read new writing that I might not otherwise have gotten round to for another year as it was to bring women authors to the fore.

Who have you read that you wouldn't have otherwise?

I’ve been challenging myself to read outside my comfort genre of fantasy. I’ve read Annette Young’s Who Killed September Falls, I’ve got Fangirl by Rainbow Rowell next on my pile, I’m dipping my toe into urban fantasy (Beyond the Veil and Ill Wind) and I’m debating reading some classics - for example, I’ve never read any Virginia Woolf and feel I probably should…

What's one thing you've learned from doing the challenge you would never have expected?

It’s really easy to find women authors to read! There are so many fabulous ones; a poke through Goodreads Lists or Fantasy Faction’s suggestions will bring a lot of choice back in any genre. Asking on Twitter is definitely a good option too; other forums tend to be a little more biased but you occasionally get recommended gems. 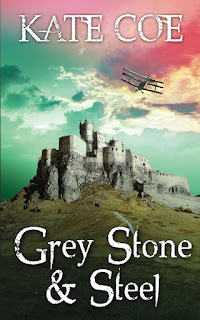 Who are you currently reading? Who would you recommend us reading?
I’ve just finished the Divergent Series by Veronica Roth (fine if you like YA - it mostly irritated me) and then detoured via criminal psychology with The Jigsaw Man by Paul Britton. I’m currently working through the Fight Like A Girl anthology along with The Magicians by Lev Grossman and Beyond The Veil during my commute (yes, I read a lot).
As for recommendations:
-          Uprooted by Naomi Novik - I absolutely adored it.
-          Jo Hall’s Spark and Carousel - great fun!
-          A Darker Shade of Magic by V E Schwab is a really nice magic system and world; if you like Brandon Sanderson you’ll like this.
-          I’ve always got a place in my heart for Diana Wynne Jones and Anne McCaffrey; Wynne Jones is thoughtful and fun, and McCaffrey does amazing-world building (with dragons).
-          Cruelty by Ellen Croshain for a nice dose of Fae mythology, sex and mystery.
-          If you haven’t read Emma Newman’s Split Worlds series, get on it!

Do you think there is a difference in the way men write about subjects and the way women do?

In my personal opinion, no. I think more men tend towards the grimdark and horror ends of the spectrum, and more women tend towards the romance and fantasy... but I also think that a lot of that has to do with perception in the publishing world and the readership, and unconscious bias in the writers. I don’t think there’s anything stopping any author writing in whatever style and about whatever subjects they’d like to, and I’m really glad there’s more diversity coming through in all the genres - it means more new ideas and more brilliant writing!

To slightly divert into a minor rant, I did recently come across someone (male) on the Interwebz asking how he could write better women characters... but refused to accept the answer of “write them like people” because Women Are Different. While it’s usually presented as a gender problem, I think this is part of the larger problem of writing “other” characters rather than just the opposite gender; I often wonder why aliens in sci-fi are disconcertingly human, when actually there’s no reason they would be! Writing women is just a step along the “different POV and different motivations” path that makes a good storyteller. Although I do wonder when that guy is going to get a clue, and realise that women aren’t aliens... maybe when he starts writing actual aliens?

Why would you say representation is important?

“They’re like me. I can do that.” It’s often a very subconscious bias that means because we don’t see anyone like us, we can’t do it - we’re not good enough, or it’s not a women/men’s world, or simply it’s not something Nice People Write About (erotica, horror, even fantasy). But when you see someone like you doing it and being successful... hey, maybe you can do it too…
On a personal level, it’s not as big a thing as seeing a gender (or racial/cultural) representation out there, but I’ve not yet encountered anyone who writes in the same way or style that I do. It’s taken me a good ten years to be able to accept that I don’t write to the same formula as other people or in the same style, and accept that it’s what makes me different - and that it’s a good thing! Magnify that self-doubt and throw in a dose of insecurity and rejection, and it really shows how crippling the lack of someone to look up to can be for new writers.

How do you think the publishing industry addresses discoverability and representation and what would you do if you had the power to change it?

Unfortunately, a lot of the big publishing powers have to stick with what they know to make money, and it’s a real problem; it means the market and the reading world stagnates. They are starting to embrace the powers of new technology and the new world, but it’s a really uncertain time for everyone... I think, if I could change anything, it would be asking the large publishers to just take some risks. Print On Demand and the new forms of reading mean that it doesn’t have to be an expensive print run; they could take a punt on a lesbian romance, a short novelette, a collection of short stories from another culture. It’s all stuff that’s badly needed in a market that sometimes feels very same-y, and although The Same Stuff is what sells right now, it doesn’t help with the future.

Having said that... the small presses are doing their bit to provide that experimentation! If you haven’t come across Grimbold Books, Fox Spirits, PS Publishing, Almond Press and Angry Robot, then go check them out - they’ve got some excellent writers! (Disclaimer; I’m with Grimbold Books and Fox Spirits, but I also read their books - so it’s definitely advice as a reader as well as a writer.)

NB: I opted for “books by female authors previously unknown to me” - but I know Jo didn’t put any limits on the Challenge, so there’s definite potential for twists!