Andrew is not only a writer of novels but also short stories and short- & feature-length screenplays – he was a semi-finalist in the 2009 British Short Screenplay Competition and was commissioned to write a 90-minute feature in 2012 for SeeView Pictures.


‘Tiberius Found’ is his first novel published in paperback and ebook formats, and is the initial book of a three-part series: The Emperor Initiative, with the subsequent instalments to be released in 2014 and 2015. 2014 will also see the release of his first “Oliver Drummond” supernatural adventure novels set in the 1920s: ‘Oliver Drummond and the Four Horsemen’, which sees schoolboy Oliver ‘Bulldog’ Drummond pitting his wits against occult groups, ghosts, murderers and traitors who want to gain control over the horseshoes from the Four Horsemen of the Apocalypse.


He currently works in the Adult learning environment with the intention of becoming a full-time writer in the near future and lives in the UK with his Welsh Terrier, Ceiwyn.

I asked Andrew to tell me more about The Emporer Initiative 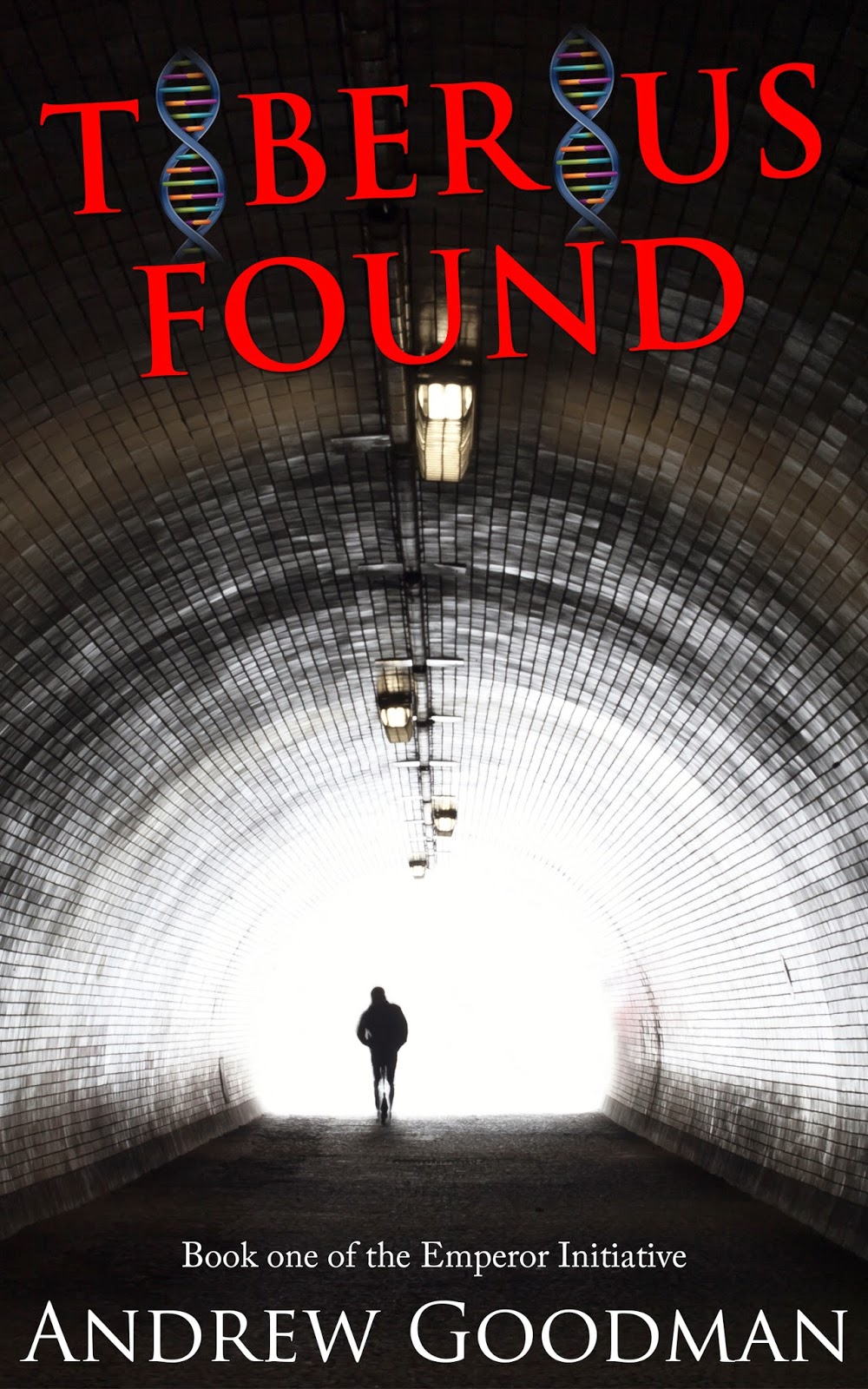 What would you do if you discovered your whole life to be a lie? No, Daniel Henstock doesn’t know either.

The Emperor Initiative is my three-part Young Adult action/adventure series set in 2028, and comprises of Tiberius Found (2014), Tiberius Bound (mid-2014) and Tiberius Crowned (2015). The novels follow the story of schoolboy Daniel Henstock after he discovers that he’s the world’s first one-hundred-percent genetically-engineered human – assigned the codename Tiberius.

‘Tiberius Found’ is my first self-published novel and is available in print (Amazon) and as ebooks (Kindle and Kobo) and has been described as “Alex Rider meets Jason Bourne”.

Daniel Henstock’s parents are murdered on his sixteenth birthday and an attempt is made to abduct him; to return him to the scientists who want to finish the job they started when he was born.  In order to escape he must flee the country, and go “off grid”. Alone and scared he heads to America where he thinks he’ll be safe, lost amid the millions of people in New York City and it’s there where he decides to dig deeper into his past, to find out the truth about his origins. But in doing so he inadvertently alerts his enemies to his whereabouts.

It’s also in America where he meets, and falls for, Eleanor but their growing friendship marks her as a target as well. Can Daniel find out the truth whilst trying to evade agents sent to bring him to heel? As his enemies close in, and not knowing whom he can trust, Daniel must draw on resources he never knew he had to win his freedom. He takes the decision that too many people have already been hurt because of him so, with the help of a black-market dealer, he returns to the UK – and to an almost certain trap – determined to end it once and for all.

But his scheme doesn’t quite go to plan and when Daniel comes face-to-face with his nemesis – Gregory Dryden – he considers that sacrifice may be the only way to end the Emperor Initiative programme and protect those he cares about.

The second book picks up the story a few weeks after the end of ‘Tiberius Found’ and has Daniel facing the fact that old enemies aren’t that easy to get away from. He also discovers that Gregory Dryden was just a cog in the machine and that there are even more powerful people behind the Emperor Initiative, lurking in the shadows and pulling the strings. People who are determined to continue towards their ultimate goal, no matter what the cost. No matter how many lives they ruin in the process.

He finds out, too late, that greater dangers often lie much closer to home and is once again shown that he can never be sure of whom to trust. Almost everyone, he comes to realise, has an agenda.

This is a much darker novel than the first book, which contains stronger language and has elements of physical torture.

The third book continues the story a few months after the end of ‘Tiberius Bound’ and has Daniel finding out who his real enemies are and deciding to take the fight to them. These are people at the very top of world influence and if he’s going to end the Emperor Initiative programme then he knows it will have global consequences. He also knows that if he’s to bring the Initiative to an end then he might have to cross a line that would make him just as tainted as those he wants to stop. But would that be a price worth paying if it meant ending their experiments and to save the girl he loves?

And he learns that secrets can never be kept forever, and when they do come to light the damage caused can be significant.

I wanted to write the kind of stories I used to read as a child/early teen that had plenty of action and a central character I could identify with. It was also important that it was the main character who drove the story forward and didn’t let the adults sort everything out. I wanted a proactive character, not someone who just reacted to what everyone else did.

The original idea for the story came from a genetics-themed short story competition and which, in broad terms, ended up being the opening chapter. But I wanted to find out what happened to Daniel after he arrived in America so I continued writing his story and was about three-quarters of the way through ‘Tiberius Found’ when I realised that there were going to be too many unanswered questions. I decided that the story had enough legs to warrant a sequel.

When I started planning ‘Tiberius Bound’ I knew that a third book in the series was possible, with each book falling neatly into significant stages along Daniel's road of discovery and challenge. I call it a three-part series as I have a real dislike of the term ‘trilogy’; too much of a cliché connotation to the word.

I wanted titles that were different from the norm and liked the idea of having alliterative novel titles – Found, Bound and Crowned – as, I hoped, it would stay better in the reader’s mind. The cover image was also important, as it’s the first thing a potential reader sees, and I used pro-ebookers on fiverr to create the artwork which I’m really happy with. I love the font graphics and the image conveys a sense of cold loneliness, which is how Daniel feels for most of the novel.