Guns of the Dawn - review & interview with the author

If you look Adrian Tchaikovsky up on Wikipedia it says - "Adrian Czajkowski is a British fantasy author. His best known work is the Shadows of the Apt series. Tor Books has announced it would publish a new science fiction book by Tchaikovsky after Shadows of the Apt has finished." Guns of the Dawn is that book.

The Bristol Book Blog has been lucky to get an advanced copy of the book and an interview with the author. The book is now launched and available from all good book shops.

Interview with the author:


Many thanks for talking to us Adrian, here's ten questions about the book -

‘There is only one book – specifically conceived and started as a book – which has never let go of me, and has shadowed me all the way to the present day. It is Emily Marshwic’s book, the story of her war for her king, her country and her truth, however hard to reconcile those may be. I am happier than I can say that, after all her perseverance (a character trait that appears to have preceded her actual realisation as a character), she is finally seeing the light of day.’ Adrian Tchaikovsky

How long have you been writing this book in your head? How long did it take to get to first draft?

I can’t remember the exact date but I made my first start on it (a shot at what is now the beginning of chapter 2) way before Empire ever came out – some time maybe mid-90’s? I went back to it right before starting on Shadows of the Apt and produced a very rough first draft, that’s seen a lot of rewriting since. This really is the one idea that hasn’t let go of me, though.

2 - Some people are saying its Napoleonic, others that the war feels like the Crimean, did you base it (even loosely) on any particular conflict? (I think there are elements of Vietnam & WW1 in it too?)

Oh well, when I borrow from history I do it by the handful. Although the setting is regency, the battlefield Emily gets is very Vietnam-y, and the politics has a bit of English Civil War (and indeed US Civil War) and a bit of US War of Independence to it. Hadn’t intentionally gone for Crimea, and certainly not for WWI (I kind of did my fantastical take on that with Shadows of the Apt). There’s certainly more of the early 18th century England to it than anything else. 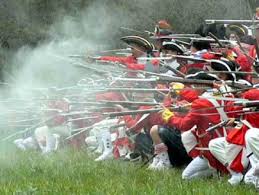 3 – What did you learn about writing by writing this book?

There are some big differences between Guns and Shadows of the Apt, but not necessarily the ones you’d think. Yes, Guns has less of the overtly fantastical to it, but that’s not something, I think, that shapes the structure or tone of the book particularly. What is important is that Guns follows one character’s POV throughout – we only ever see the world through Emily Marshwic’s eyes. That automatically gives you a tighter focus – less world-spanning wars and politics, more individual survival, honour and experience. It’s a more character-focused book for that.

4 – This is a very well-crafted book, plot wise and every character feels necessary and important. Do you do a lot of pre-planning?

Thank you, and yes. I plan a lot before I write. I generally have a chapter by chapter breakdown, and often scenes within chapters, and sometimes even beats within scenes – particularly with important conversations or complex action sequences. Certainly sometimes I need to rejig things at every level, but having that framework helps me pace and structure the book at the outset.

5 – This is a standalone – would you ever be tempted to revisit the characters and the world again in shorts or sequels?

Certainly. There’s actually a pretty cool sequel idea that came to me when I was discussing the book at a party a while back that’s taken root and grown since. It’s something I’d love to have the opportunity to do, if I feel there’s an audience for it.

6 – It’s a minor spoiler but including rape in a novel seems to be a fraught issue, how did you approach this?

Very, very carefully. There are so many bad/insensitive ways to use the concept – often as a throwaway to make your villain more villainous, for example – that are wholly unnecessary. Yes, it’s a thing that happens, and with women joining a formerly men-only army, the spectre of it was always going to be there. But at the same time it’s a real thing in the real world that happens to real people with appalling frequency. I genuinely hope that I haven’t caused any distress or harm with the way I’ve approached the subject. I’ve had that very much in mind when writing. And if I have misjudged, then I am truly sorry.

7 – A lot of people are comparing the first section to Austen, is any similarity conscious?

The setting of domestic Lascanne is intentionally Austenian – although under greater wartime privation than the world she was drawing on. Emily is the middle of three sisters, and her bureaucratic nemesis Mr Northway is very much a Mr Collins homage. Austen is a literary institution: she wasn’t alone in revolutionising literature in her day, but she is deservedly seen as one of our great literary giants. In writing not only a fantasy Napoleonic, but also a fantasy Austen pastiche, I hope it’s seen more as homage than petty larceny.

8 – Where there any specific challenges with this book that you’ve not encountered in previous books & if so how did you overcome them?

I’ve mentioned narrowing the view to a single character, which deprives me of my usual head-hopping to give you all sides of the picture. In Shadows of the Apt it was always good to know I could pop into the Wasp commander’s head to show you how he was thinking. Here, I, Emily and the reader all have to try and work out what’s going on from the same limited set of facts. The book also has a three-act structure that my others haven’t had – possibly because it’s so much more of a stand alone. I did wrestle with the first section (pre-war) quite a bit – it had to be a contrast to the brutalities of the fighting, but at the same time it needed to keep moving.

9 – Did you do much research before writing this novel? If so what on?

I tend to build up a head of knowledge on a setting or a subject, which then manifests as a plot idea – hence a lot of “research” happens ahead of time. With fantasy, too, I am generally writing in a secondary world precisely so various details are under my control that wouldn’t if I was writing in a historical setting. Even alt-histories have a large research burden, because you need to make the ramifications of your changes believable. Guns stands a step further from the real timeline than that, so once I had the feel and basics of the setting in mind, I had a fair amount of freedom with the rest. Recently I’ve written a few pieces set in the very near future (such as the novella The Bloody Deluge that was in Abaddon’s ‘Journal of the Plague Year’. With that sort of thing, very definitely set in an identifiable real world, I found myself doing far more research on all sorts of odd things.

10 – Were you nervous or excited (or both) to be working on a book that wasn’t part of the Shadows of the Apt series?

Both, and still am. You bed down with a series – it has a following who will probably buy the next book, so you can get comfortable with it. I’ve had ten books and 6 years like that, and now I’m out on my own in the wilderness again, hoping that at least some of those readers are going to come and find me. It’s terrifying, but it’s also exhilarating to be able to tell some of the stories I’ve had bubbling away in my head that wouldn’t work for the kinden.

Emily Marchwic, middle sister of a noble family, lives in Lascanne who are pursuing a bitter war against their neighbour Denland. The war was started when the Denlanders committed regicide and instituted a republic, a direct danger to Lascanne's monarchy. The war has emptied the country of men, Emily's brother and brother-in-law being part of the draft and the sisters try to get on with their life in a country where the old and young and the women are the only ones immune to the draft. Due to family history the Marshwics consider the local governor, a Mr Northway, as an enemy.

The first third of the book builds a very clear picture of what the country is like without men, with scarcity, the impact of brigands and the very human desire to carry on as if everything were normal. This part of the book is well observed. Emily and her younger sister attend a ball held by the king, and get to meet Giles Scavian, a warlock. The warlocks are key to the war. There is an immediate attraction between them but Scavian must leave for the front.

Then comes the news that more soldiers are needed and that the draft requires one woman from each household and it is obvious that Emily must go to war. The war is being fought on two main fronts, the Couchant and the Levant. The new recruits all wish to go to the Couchant for it's wide open plains favour the glorious cavalry of Lascanne but Emily is sent to the Levant, a swamp requiring jungle warfare.

This middle section has a healthy mix of exciting warfare, weary cynicism and a battle for the soul of Emily between the dashing warlock Scavian and the difficult Mr Northway with whom she has an illicit exchange of letters.

As things get worse Emily begins to have doubts about the cause, he country and her enemy and she is thrust into a position to make decisions that will affect everything.

Tchaikovsky has built a world that is supremely focused, with only hints of the wider world outside the story, a function of the close POV. The small hints of a swamp civilization and the wider world left me wanting more. The story itself is well made, I was impressed with Tchaikovsky's storytelling abilities and his command of the reader's emotions. This is a big book but doesn't read like one, it propels you forward effortlessly. I enjoyed the middle section the best, the brilliant survivor's club, the creeping claustrophobia of the swamp, the slow revelations. But the ending was also very satisfying too..

Overall - Large but very readable book, if you ever wondered what it'd be like for one of Austen's heroines to go to war then this is the book for you!