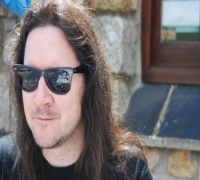 John Hawkes-Reed is a Unix hacker by day. By night, too, if it's been one of those sorts of weeks. His origin story involves finding the big yellow Gollancz hardbacks in Winchcome public library, the 'Making a transistor radio' Ladybird book and the John Peel programme. The 2006 Viable Paradise writer's workshop was something of a life-changing experience, and he has been quietly emitting stories of varying length since then. Some of those stories can be found in the anthologies 'Airship shape and Bristol fashion', 'Colinthology','Dark Spires' and 'Future Bristol'. He is fascinated by cold-war architecture, islands and stationary engines. John owns too many books, not enough tractors and is trivially Googleable.

John wrote Miss Butler and the Industrial Automation Group  for the anthology and has dropped in to talk about ideas, amongst other things...

Summer 1983. Peelie plays the first release from Red Guitars, a band
from Hull. 'Good Technology' becomes an indie hit, features in that
year's Festive Fifty and is part of The Tube's guide to the Hull music
scene. It seems obvious that it is only a matter of time before they're
playing packed gigs at the Town & Country in Kentish Town. The song
itself is a minimal piece. A mildly ironic list of post-spaceflight
technological wonders. It is stripped back and carefully avoids any
rockist cliche, as was the orthodoxy of the time.

In 1983 I'd fallen into work as a bench technician, repairing what we
were then pleased to call 'personal computers' - Superbrain, Altos,
AppleII, LoMac, Anadex, Qume, Televideo - all names completely
meaningless to the people around me. It felt like I had my hands on some
of the future that one would only see once a week on Tomorrow's World,
and which otherwise was cheerfully avoiding rural Gloucestershire.

For that reason, and because it's a damn fine song, 'Good Technology'
turned into something of a personal theme. I played it to death via
mixtapes ruined by a variety of nasty car cassette players, and the
lyrics - We've got computers that can find us friends/We know roughly
when the world will end - stayed in the back of my head for the next
thirty years.

Winter 2015. Because I drive a car from the late 90s, if I want to
listen to something other than the whistle of a turbocharger I have to
go and find the pile of blank CDs that are gathering dust next to the
selection of boot floppies and create an 'audio project'. I can almost
hear the young people laughing into their Tumblergrams as I do it. One
of the tracks is 'Good Technology'. I'm driving out of Kelston towards
Bath when the carefully-digitised surface noise from an old 7" leads
into a large helping of backwards guitar. Because I'm older and/or
paying more attention to the road and/or just have a different brain,
the lyrics first describe a quaint sort of retro-future where everyone
will have smoked while worrying about impending nuclear war, then mutate
into something quite different - We've got cigarettes that can tell us
who we are/We've got missiles that reproduce a work of art - and each
new mutation suggests a complete and functioning world brimming with odd
stories.

People very rarely ask me where my ideas come from. Usually they say
something like 'I have no idea what you just said, but it sounds
amazing.' And then they change the subject.

The thing is that lone ideas are pretty weak sorts of thing. You
couldn't in all good conscience stretch one idea out into a story. You'd
get about half way and then there's be this nasty snap as some part
broke off under the strain, which would leave you with nothing but a cut
where the sharp bits sliced through the back of your hand. However, if
you just quietly let the things arrive and fall into place like some
wonky kind of Tetris, then you find that through a combination of
piling, twisting and frantic jabbing, odd selections of ideas fall
together with satisfiying 'bloink' noises. Or you could think of it as
accelerating ideas to close to the speed of light,  bashing them
together and then carefully recording the subatomic story-particles that
come spalling off the impact zone.

That is to say that creativity is a lot like playing Tetris in a
particle accelerator.

Another thing that people rarely say around me is 'Art or engineering?'
because as a hacker who writes SF, the only sensible answer is 'Yes'.

Autumn 2006. I'm in the Island Inn on Martha's Vinyard, working my way
through a case of expensive 'imported' beer (so Heineken, probably. Or
Wifebeater.) while listening to Uncle Jim and TNH tell stories of fixing
the dialogue in a story over ICQ. For reasons of dramatic wossname, but
more likely because of the beer, everything went a bit wibbly and I was
back in 1989 and reading about some Amiga demoscene crew who'd managed
to crack the protection on some game or other by reading hex dumps over
the phone to each other.

"You were debugging that story, live," I squeaked.

Everybody seemed quite pleased with that statement, although perhaps a
bit 'Well, yes. Obviously…'. However I had to bag a fresh bottle and
wander out onto the lawn so I could listen to the crickets and the surf
and think about what had just clattered into place.

Hacking on code was this thing I'd fallen into by accident - I'd happily
assumed my future would be some sort of electronic engineering because
this programming malarkey seemed to involve more maths than I could cope
with, proper university and faffing about with coding sheets and
flowcharts. Battering away at a keyboard in Turbo Pascal was just
mucking about and would never lead to any sort of proper work, because I
couldn't see how the type of complete impostor like me could ever
actually manage to create the huge sorts of programs that actually did
things and had input boxes, save-as icons and printer drivers. However,
it was curiously satisfying work for which I had a pleasing aptitude.

I was lurching around the grounds of the Island Inn because I'd written
a story over a period of many months and many, many cross-functional,
cross-Atlantic team meetings (sit at the back and keep very still, the
videoconferencing kit will assume you're furniture and ignore you) and
sent it off to Viable Paradise more or less to find out what would
happen next. I still couldn't see how anyone could hold the structure of
a complete novel in their head. As far as I could tell it all went - (i)
I can typing! (ii) Writery things! (iii) Profit!

At this point I should tie this all up by pulling the obvious
comparisons together for an emotionally satisfying conclusion. And,
given that it's me writing this, there should probably be a
self-deprecating geeky in-joke.

Alternatively I could just stop.
Posted by Unknown at 07:37