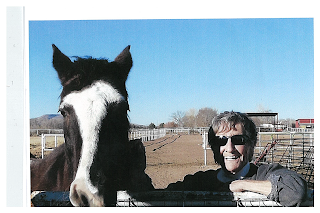 Maria was born in New York City but grew up in Spain. She's a graduate of Temple University in Philadelphia, and worked for several years teaching psychiatric nursing. After completing school, Maria moved to New Mexico and worked in the Navajo and Pueblo reservations offering psychological and counseling services.


Maria still lives in New Mexico enjoying the open spaces sometimes on horseback, sometimes on her mountain bike along the Rio Grande.

Maria wrote a book about the Spanish Civil War called - Breaking the silence and has dropped in to tell us about it.

Breaking the Silence is a book written about the Spanish Civil War in Spain many years ago. It is my first and perhaps my last book. I am 85 years old and I have never written a book before.
I guess you must be wondering why a person my age decided to write a book. Well, there is a reason. Let me tell you about it as quickly as I can. 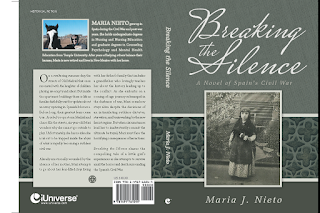 I was born in New York City but grew up in Spain from early childhood to my teen years.  I was six years old when the Spanish Civil war began, a horrifying experience where I found myself in the middle of falling bombs and mortar shells killing everyone around me. What followed after the war may have been worse. The  Spanish Republic lost the war, and the tyrannical murderous fascist dictator Francisco Franco placed Spain in a state of terror. All liberties were gone, thousands and thousands of people were executed every day, thousands more used for slave labor, and thousands imprisoned year after year. But one of the worse acts from this dictator may have been the well planned brain washing techniques used on children making them became loyal to the regime and alienated from their parents and family. Families of these children learned to fear them because of the possibility of being denounced, turned in to the police if they ever said or did anything against the regime.I was one of those children.

After some years of marching to the beat of drums and waving flags with my arm extended in a fascist salute, I was discovered reading a Reader´s Digest in Spanish. That was forbidden in Spain. No foreign books, papers or films were allowed. Because I was an American citizen, my father was given three days to get me out of the country. I was sent to Portugal where I waited for a ship to New York with seven Jewish children that had escaped Germany.

I learned English all over again and graduated from High School and began  roaming  the streets of Greenwich Village beating drums in Washington Square with other groups of teenage pacifists. We were called “Beatnicks” at that time, and we wanted no more wars after the horrible Second World War ended.

Time passed, and I began to think and want to go to school but had no money. I joined the US Navy and after four years, the GI Bill of Rights paid for me to complete nursing school in Philadelphia´s Temple University. I worked teaching psychiatric nursing during the day and went to school at night. After many years of night classes, and finally having earned enough advanced degrees to help emotionally wounded people identify their problems, and to hopefully resolve them, I went to work.
I moved to New Mexico and worked with the Navajo and Pueblo Indian people for three years in mental health, and then moved to Albuquerque working for the University of New Mexico’s Psychiatric Emergencies for the next 15 years.

When I retired, with no troubled personas to need my help, I began to feel a strange sadness and unrest. A deep weight settled in my chest, and as time passed, I clearly began to hear, remember and see my childhood friends suffering and dying under falling bombs, the fire of machine guns the explosions of mortar shells, as well as starvation. These were my friends, the children of Spain who died and as the years passed, were never remembered. I realized that a therapeutic exposure of the things I had witnessed in my childhood was a necessity for me. I had to remember and expose  the things I had lived and experienced in order to be at peace with myself. Writing it down for others to read seemed the best way .

And so, I wrote Breaking the Silence to help the world remember what the people of Span did not want to discuss. Let me explain:

The people of Spain have been silent since the Civil War ended. First they were forbidden all liberties by Franco, the dictator that won the war, and later talking about the war or the years after the war was not allowed by the new king of Spain. A king who had supposedly been elected by the people after the dictator Franco died. To this date, Spain will not talk about what happened during or after the Spanish Civil War. The terrible war between families with the killing of brothers by brothers, fathers by sons and sons by fathers  to prevent fascism and a dictatorship from happening . A war that Franco won with the help of Hitler and Mussolini, and the world powers did nothing to help. Shortly after the Spanish Republic lost the war, Hitler and Mussolini used the weapons they had developed and tested in Spain to kill millions of people in Europe, and the Second World War began.

Today Spain’s youth know little or nothing about the Spanish Civil War, or the terrible days after the war under a ruthless fascist dictator. The old were instructed by the king´s “Pact of Silence” law of 1977 to stay silent, and the murderous fascists during Franco’s dictatorship were never made to answer for their crimes after Franco died. Instead, these criminals continued to gather money and power from the new government and Spain as Spain continued to keep silent. I may have been a child during that time, but I can now remember and I can no longer stay silent. Breaking the Silence gives an account of what happened  in the form of a fictional novel with some occasional humor,  but the facts are real, the children that died in the book are real.

I am real, and now after writing the book, the weight in my chest is gone. I am finally  at peace.
I sincerely hope that people will read the book and be entertained as well as informed, and perhaps join the millions of humans who can no longer accept wars as a way of resolving differences between people.