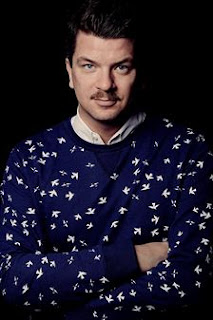 Mats Strandberg, together with Sara B Elfgren wrote the popular Engelsfors trilogy (The Circle, Fire and The Key) about teenage witches in Sweden. He has previously published three novels, and been a columnist in Swedish newspaper Aftonbladet.In September 2015 Mats's horror novel "Blood Line", which he summarizes as "Stephen King on a cruise ship" will be released.

I asked Mats a bunch of questions about his writing

You have a new book coming - can you tell us a bit about it? 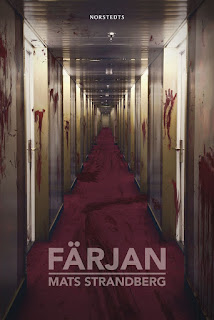 Well, it is set on a cruise ship between Sweden and Finland. These 24-hour ”booze cruises” are quite infamous in both countries, and I realized they were a perfect setting for a horror story. The cell phones don’t work, and there is no way to escape. I thought a lot about the Alien films – you know, ”On the Baltic Sea, no-one can hear you scream”. I also thought of mythological ships, and the Demeter in Dracula. What is so great about these ships is also that they provide a microcosm; I could populate it with the party girls, the family reunion, the tired truck driver, the lonely old woman looking for adventure, the man who is going to propose on the cruise. And also the staff; the security guards and bartenders and the bitter former Eurovision star whose career has gone so far downhill that he is now hosting the karaoke nights on board. The book comes out in Sweden in September and is called ”Färjan”. My agents are calling it ”Blood Line” when talking about it abroad, we’ll see if that’s a title that sticks if it gets published in the UK or US.

Your previous three books, the Urban Fantsy - Englesfors trilogy, were written with co-author Sara B Elfgren, how did that collaboration come about?

We met through a mutual friend. I had written three novels, and Sara was working as a script editor for a big movie company. We soon discovered that we had a lot of mutual likes and dislikes in pop culture. We decided to try and write together, something that focused on teenagers in a small, industrial town. We wanted them to be forced to get to know each other, and themselves, by having to work together towards a common goal. We wanted a coming of age-story that could also be a real pageturner. So we decided that they were witches, Chosen Ones who had to stop the apocalypse.
We were incredibly naive. We just went for it, even though we hardly knew each other. It could have gone terribly wrong. We had no idea that this trilogy would swallow our entire lives for 5 years. But Sara is the best co-writer one could ever ask for.

Well, the wonderful thing about being two authors is that everything gets twice as good in half the time. I was looking forward to writing my own novel, but I had forgotten how much time it takes – not just the actual writing, but also coming up with ideas, and trying to sort out the good ideas from the bad. And writing is a lonely job – especially when you are used to sharing the kicks with someone. The upside to writing yourself is that you get to decide everything. You are God.

Why do you choose to write horror

Honestly, and I know this sounds super corny, but I feel that horror really chose me.
Stephen King made me fall in love with reading when I was 10, and I’ve loved the genre ever since. For me, horror has been such an important outlet. Watching a good (or bad in a good way) horror movie releases so much anxiety for me, relieves me of so much stress. It is the best kind of escapism for me, because it really grabs your attention. And also it has made me appreciate my life – my problems don’t seem so bad compared to the guy getting his leg sawn off by inbred cannibal clowns. As a writer, the same things apply. But also, it’s such a good genre to explore characters and big questions about life, death, good, evil, humanity and the inhumane…

That trilogy is published in over 20 countries - do you collect the foreign editions?
Did you get a lot of input into the translations? Are your other books going to be translated into English?

It’s even more by now – we’re translated into 25+ languages and published in even more countries (like the UK versions for example, they are also published in other English speaking countries across the world). English is really the only language that me and Sara know well enough to have an actual input on. The UK (Hammer) and US (Overlook) publishers have been kind enough to let us read the translations before they were printed, but it is still hard to know if certain nuances come through. I hope the new book will find its way to the English market as well. It was just sent to the printer’s here in Sweden, so my agents haven’t been able to shop it around yet. Fingers crossed!

That’s a hard question, because none of my - or mine and Sara’s - characters have especially enviable lives, ha ha. We put them all through some serious stuff. But of course, there are some magical powers from the Engelsfors trilogy I would love to have. I have wanted to be able to fly ever since I saw my first Superman movie.

Actually, I don’t. I have never been a big reader of short stories, and I think it takes a certain mindset as a writer to pull it off.

”So, how did it feel to win the Nobel Prize for literature?”

Many thanks to Mats for the answers. Here is a trailer for the new  film based on Circle that you can check out: