Today we are excited to bring you an interview with Christopher Fowler whose new book - The Sand Men will be released in the UK on the 8th October. 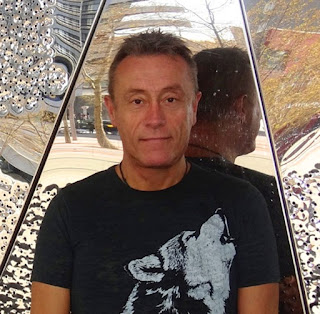 Christopher Fowler is the five-time British Fantasy Award winning author of over thirty novels and twelve short story collections, including the hugely popular Bryant & May series. His work has appeared in videogames, graphic novels and radio plays, and he has published two critically acclaimed memoirs, Paper Boy and Film Freak. He has a weekly column in The Independent On Sunday, and splits his  time between London and Barcelona. 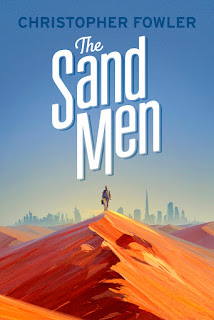 Can you tell us a little about the book, what's it about?

In Dubai there’s a new world of high-end, high-luxury resorts emerging for the super-rich – but at what price to everyone else? Lea, Roy and their 15 year-old daughter Cara live in a gated community reserved for foreign workers. Roy has been hired to deal with teething problems at Dream World, a futuristic beach complex. In the oppressive heat, the wives follow behind their husbands, cooking and arranging tea parties, but Lea finds herself a prisoner in a land where Western women are regarded with suspicion. Then one night, the most outspoken ex-pat is killed in a suspicious accident. His death is the first in a string of terrible occurrences that divide the foreign workers. Lea’s neighbours start to blame migrants, Arabs and even each other. What happens in a world where only the rich are important?

Dubai is a fascinating place - I was reading a piece about drone technology by Tim Maughan, (a SF writer turned journalist) and he thinks that it is trying to position itself to cope with the end of oil. How much research did you do? Did you visit? Do you agree with Tim?

I stayed there twice, once on the community estate where the book is set, and talked to a great many people. I agree totally with Tim - the oil is going and a new society must replace it, but how will this world work within an orthodox culture? Some of their ideas are good, but perhaps their biggest problem comes from within.

You say that you've broken out of a pigeonhole with this so what did you learn about writing by writing this book?

I’m trying to step back from straightforward thrillers with this book, and make readers ask questions for themselves. For example, how much is the main character Lea responsible for what happens, and is she to blame at least in part for the fracturing of the community?

The cover is quite striking - were you involved in putting it together at all?

We all put in ideas, but this has been the 4th cover in a row from Solaris that has knocked me out - perhaps the best yet.

What are you most proud of in this book?

I think the sense of danger and uncertainty; you can’t simply say ‘well, this happened and that happened’ - I have an opinion about one of the key events which might surprise readers; we’ll see if there’s a discussion when the book comes out. I’d love to do a panel about it. Also, I wanted to catch the tone of JG Ballard in the writing, and I think there are places in the book that do this.

You've written over thirty novels, do you have a set process? If so can you describe it.

The thing that changes most is the amount of time I spend - this started life under the title ‘Dream World’ and went through a great many refinements. My Bryant & May books are more straightforward. Also the language in this one had to be absolutely right. I threw away about a third of my finished material to streamline it.

You've been descried as being "an author that would make a good serial killer" (Time Out) are you flattered or disturbed by that?

That’s going to haunt me forever. It didn’t help that in a review of my memoir ‘Paperboy’ someone said that my Dad was ‘worse than Fred West’ - he wasn’t terribly happy about that.

What's currently on your 'To be Read' pile?

‘Tigerman’ by Nick Harkaway, the collected stories of Daphne du Maurier, and some Ray Bradbury tales I missed.

If you could live in a luxury gated community in any country which country would it be and why?

I wouldn’t and yet I accidentally do. I live in a warehouse in London that the architects next door owned the access to, so they put a gate across it, and I hate the enforced privacy. I also live in Barcelona, in a crazy building full of very rowdy neighbours, and love the fact that they play the piano and do the laundry at 2:00am, and argue - a lot.

In one sentence what's your best piece of advice for new writers?

When you’re sure what you’ve written is rubbish, it means you’re getting better.

Many thanks for the interesting answers.