Interview with Sara B Elfgren

Back in July we interviewed Mats Strandberg, one half of the writing team behind the amazing Engelsfors trilogy. Today we've got Sara B Elfgren the other half of the team giving her side.

Sara B. Elfgren (B is for Bergmark) started her career in the film industry as a screenwriter and script editor. She has a degree in film studies. The Circle was her debut novel. She is currently writing a new fantasy book series and, together with comic book artist Karl Johnsson, the graphic novel Vei. She has cowritten the screenplay to the film adaptation of The Circle together with director Levan Akin.

Sara was born in 1980 in Stockholm, and she still lives there with her husband.

So this is your chance to put your side of the story - how did the collaboration with Mats Strandberg come about?

I don’t really have anything to add! Other than that he is an amazing co-writer and human being. I’m very lucky to have met him, and I look forward to writing with him again.

As long as you have the right partner there aren’t any drawbacks to collaboration, except the need for more logistics. I love working on my own and making all the choices, but I couldn’t be without my collaborations. I just published my first children’s book, Just nu har vi varandra (Time for each other), and the illustrator Maria Fröhlich and I are working on a second book with the same characters. I’m writing a fantasy graphic novel with artist Karl Johnsson, and working on scripts with several directors and other writers. I learn so much from these collaborations and they give instant energy that sometimes can be hard to find when you’re writing on your own. With that said, I’m super excited about having started on my first solo novel. If everything goes according to plan it will be out in 2017.

I was made aware of the trilogy by a Swedish friend but now the trilogy has spread far and wide, I asked Mats about the translations already, so I'll ask you about the covers - what's your favourite foreign edition cover & why?

I’m very pleased that so many foreign publishers chose to use the original covers with illustrations by Kim W. Andersson. His collection of romantic horror short stories – Love Hurts - is being published by Dark Horse in October this year (I actually wrote one of them). It was a fun treat to see the Chosen Ones as manga characters on the cover of the Japanese edition. The character Linnéa, who is a huge Dir En Grey-fan is wearing a Dir En Grey-top. The band gave special permission. She would have loved that.

The Engelsfors trilogy has changed my life, and it has touched other people’s lives as well, sometimes making a profound difference, as we’ve been told by some readers. I’m definitely proud of what I do, but mostly I feel grateful for being able to work full time, and meeting all these amazing people. I love my work.

You've worked as a script editor - how's that helped you in your prose writing?

I’ve had to hone my skills when it comes to analyzing what is amiss in a story and to find concrete solutions. Working as a screenwriter has taught me to listen to and process criticism without getting too hurt in the process. Developing a thick skin is vital if you want to survive in the movie business.

Did you have any input into the film? Is it weird seeing someone else's vision of characters you've lived with inside your head?

Oh yes. I wrote the screenplay together with the director Levan Akin, who is a very close friend. I’ve learned so much from working with him. I was at the rehearsals with the actors and rewrote lines and sometimes whole scenes. I was also in the editing room almost every day during the main part of the editing. It is very rare to get such insight into the film making process as a screenwriter and I’m so grateful for that experience. Since I was so deeply involved, I didn’t get the ”wow!” or ”wtf?” experience that many writers get when they view a film based on their book. It was an organic process. I’ll always have my own interpretations of the characters, but the movie version feels completely natural to me.

Like Mats said, we put most of them through hell so I wouldn’t want to trade places. But if I had to choose … Probably Vanessa, because she knows how to enjoy life, and she has really cool powers.

A little more than ten years ago I came pretty close to getting a collection of short stories published. Sadly, Sweden isn’t a very friendly place for short story writers.  There are hardly any magazines that publish short stories, and most publishers’ view is that short story collections don’t sell. With that said I still write them sometimes, and perhaps one day I’ll publish them, who knows? 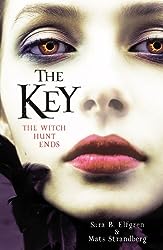 What are your favourite black and white horror films? Answer: The Haunting, The Innocents, Night of the Demon, Les yeux sans visage (Eyes Without a Face), Night of the Living Dead, Carnival of Souls, The Night of the Hunter.

Your writing is going to suck and it doesn’t mean that you suck as a writer. It just means that writing is not all about putting words on a paper, it’s just as much – or sometimes even more – about changing them. It’s the same for every writer. It doesn’t matter if you’ve published 30 novels, you’re always going to suck at some point in the process. The cure is editing.

Many thanks for Sara for taking time to answer our questions. You should go check out her novels!